An out-of-work actor having an existential crisis; Prostate Frank, sipping coffee among long-time cohorts with equally unflattering nicknames; a Canadian constable stumbling to explain why a dismembered foot mysteriously washed up on shore; a blind, talking rabbit who closely escapes death — or does he? These are some of the characters that populate Ron MacLean’s short stories in We Might as Well Light Something on Fire, a collection that challenges the reader to acknowledge, then embrace, the absurdity of the human condition.

With language that is cunningly precise without being pretentious, MacLean employs a variety of narrative styles, but what connects each story is a pervading sense of, and appreciation for, the absurd. In his treatise on absurdism, The Myth of Sisyphus, Albert Camus says, “…[I]n a universe that is suddenly divested of illusions and light, man feels a stranger…. This divorce between man and his life, the actor and his setting truly constitutes the feeling of absurdity.” In MacLean’s stories, the stark and often empirical reality of modern life breeds the kind of alienation that separates the human experience from its purpose, causing characters — and readers — to question what, if any, purpose there is in human existence. The motif of absurdity is skillfully woven throughout these narratives, and MacLean’s humor and insights create situations that are both funny and morose. His characters struggle, like Pirandello’s characters in search of an author, to make sense of their often absurd circumstances, to find meaning in their lives.

In “Night Bus,” MacLean cleverly illustrates Camus’s “divorce between man and his life” and its consequences. The narrator is part of a group tour in Lapland, Finland. As the group travels through the polar night by bus, eager to view the northern lights, the narrator finds it hard to connect to his fellow travelers, despite their shared purpose, both on and off the bus. His growing sense of alienation is first palpable in his inability to adequately share his thoughts or clearly express himself to others. Though this inability often stems from his reliance on his Finnish phrasebook, even in his native tongue, the narrator’s utter solitude is evident as he repeatedly attempts to connect with the others, is misunderstood, and then disassociates from them. This separation from others is mirrored in his divorce from his own experience and reality. He maintains a certain aloofness from his life. As the bus cuts through the polar night, the narrator, who remains nameless throughout the story, stares out the window through his own reflection and observes, “Our world is only what the headlights illumine — white on white on white.” The impact on the individual of an inscrutable, often hostile universe manifests itself in the narrator’s apparent indifference toward himself and his own body as he slowly begins to experience the symptoms of hypothermia. Though surrounded by his fellow travelers, his condition goes almost unnoticed: like the actor removed from his setting, he is truly alone.

In “The Night Dentist,” another traveler, a dentist on a pre-dawn Red Line commuter train, finds himself trapped in a world lacking purpose, a world — both literally and figuratively — devoid of light: “[N]o man achieves all he wants; we all make some accommodation with the night.” Like MacLean’s tourist in “Night Bus,” the dentist is also alienated — from his patients, his fellow commuters, and even himself. “His face mirrored in the window is not the face he remembers.” His inner world speaks not only of desolation, but because his thoughts are unknown to and unacknowledged by the other passengers on the crowded train, it also speaks of isolation, the absurdity that a man, surrounded by strangers, is also a stranger to himself.

In his acknowledgements, MacLean mentions books he “leaned on” when writing this collection. The books range from Dr. Seuss’s Yertle the Turtle to Houdini’s Box, by Adam Phillips. The latter examines the human need to escape as expressed in the lives of historical figures, from Harry Houdini to the reclusive Emily Dickinson. Its influence is felt in “Lesser Escape Artists” as MacLean’s talking rabbit escapes one fate, only to seemingly succumb to another with the same outcome. Yet, there is uncertainty. The reader is left wondering whether the rabbit escapes fate, but the narrator, more certain, quips, “In a world this chaotic, I choose to believe.” Here, we are presented with a character who clings to his light, his illusion, in a slight variation of the book’s motif.

In “What Remains,” contemporary historical fiction meets the absurd as MacLean uses two actual historical figures — Robert “Fighting Bob” LaFollette, a progressive Wisconsin politician, and his son, Robert Jr., a progressive senator who was defeated by Joe McCarthy — to highlight his incisive social commentary on the corruption that is endemic to a system where “economic power has a way of overcoming political power, no matter how carefully the lines are drawn.” Using historical figures in fiction is not a new device, nor is it, by itself, absurd. What is notable is that MacLean portrays these historical figures as ghosts who, on their mission to “disturb privilege and encourage the powerless,” appear in the protagonist’s bathroom and become her mentors as she re-evaluates her life’s true purpose.

The story’s protagonist, Martha, is a disillusioned former assistant federal prosecutor who resigned when her office failed to hold the financial industry accountable for tanking the economy. Her late father, a labor activist, had warned her of the futility of trying to change a corrupt system from within that system, advice Martha reckons with now that her illusions of justice and accountability have been shattered, her world “divested of light.” MacLean so seamlessly weaves complex character development with the absurd that the reader accepts not only that the LaFollette ghosts are real, but that they cook Martha dinner, argue with her about Sunday morning political television, and gently goad her to resume the fight against corruption on her own terms, to trade in despair for hope.

Finally, in “Quinceañera,” the struggle to medicate an obstinate, razor-clawed pet cat named Egg makes the narrator muse, “There’s a certain recognition that the lives we lead are not the lives we intended.” There is, indeed, something ridiculous, almost Sisyphean, about the narrator’s failed, painful attempts to overcome the fat tabby’s refusal to swallow a pill. This invites the reader to extrapolate: the things that occupy our day-to-day existence are also largely absurd and ultimately, when viewed from an objective standpoint, quite possibly meaningless. MacLean elegantly threads this notion throughout what he refers to as “this restless nomad of a collection,” and in the end, whether reflecting on MacLean’s stories or on one’s own life, the reader can only sit back and agree. 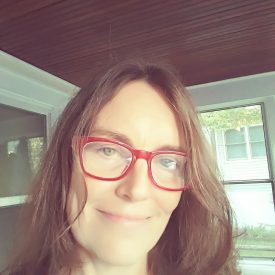 Mary Lynn-Giannakou lives in New York’s Hudson Valley with her husband and daughters. When she’s not writing, she teaches English to Adult Speakers of Other Languages (ESOL). Her work has appeared in The Santa Fe Writers Project Quarterly and Points in Case. 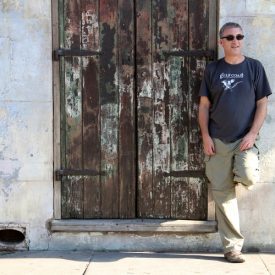 Ron MacLean is author of the novels Headlong and Blue Winnetka Skies, and the story collection Why the Long Face?. His short fiction has appeared widely in magazines including GQ, Narrative, and Fiction International. MacLean is a recipient of the Frederick Exley Award for Short Fiction and a multiple Pushcart Prize nominee. He holds a Doctor of Arts from the University at Albany, SUNY, and teaches at Grub Street in Boston. Learn more at .