When Bailey died, my husband (hereinafter called him and he) sobbed in my arms, full-body. He rocked and shook. I had never seen this before. I had never seen him sob before. In 36 years, I’d only seen tears run down his face a handful of times. It was usually after a documentary on a self-destructive genius, like Jean-Michel Basquiat or Miles Davis. And when his mother died. But when Bailey died, he shook and shivered. He made head-cocking, gut-wrenching animal sounds. I mean, I shook and shivered too, but only three times. And always after he left for work. Oh, I know this poem is not about me. And I know my husband keeps secrets. I’m glad. I don’t really want to know what he watches when I’m not around. Or what’s at the back of his socks drawer. And I don’t want to see him shit. Not really. I’ve had a hooded glance or two by mistake. That’s enough. I don’t want to touch his toenail clippings. Being intimate with my husband’s bodily chaff is not a requirement for a good marriage, is it? 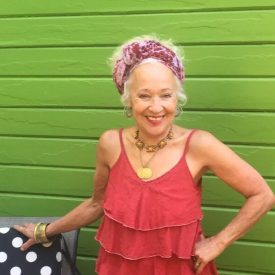 Leanne Grabel, M.Ed., is a writer, illustrator, performer & retired special education teacher. Currently, Grabel is teaching graphic flash memoir to adults in arts centers and retirement communities throughout the Pacific Northwest. In love with mixing genres, Grabel has written & produced numerous spoken-word multi-media shows, including “The Lighter Side of Chronic Depression”; and “Anger: The Musical.” Her poetry books include Lonesome & Very Quarrelsome Heroes; Short Poems by a Short Person; Badgirls (a collection of flash non-fiction & a theater piece); & Gold Shoes, a collection of graphic prose poems. Grabel has just completed Tainted Illustrated, an illustrated stretched memoir, which was serialized in THE OPIATE from 2018-2020; and HUSBAND, a collection of graphic flash memoir. Grabel’s illustrated flash memoir will be published monthly in Another Chicago Magazine in 2020. She and her husband Steve Sander are the founders of Café Lena, Portland’s legendary poetry hub of the 90s. Grabel is the 2020 recipient of the Bread and Roses Award for longtime contributions to women’s literature in the Pacific Northwest.