is coral bells and touch-me-nots,

heaven is the garden she’s been walking

since she left her life, the crushed smoke

beneath her muddy toes, the broken vines

laying down their obstinance.

she’s been searching for water

that no one will give.

it doesn’t matter. she knows where

the river winds itself around the cliffs,

where the snakes polish their lungs

in bile, where the darkness multiplies

in sleepless schools of fish,

where no man can write his language

on reams of paper, where the belly of

sorrow is slick and clean,

where a heart is pumping vinegar

inside the convex mouth of an oyster. 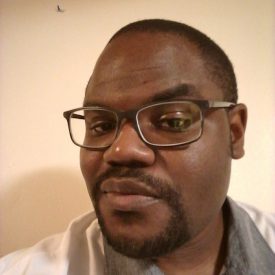 Cedric Rudolph moved to Pittsburgh, PA in 2016. Two years later, he received his MFA from Chatham University. He is currently in his third year of teaching fiction and poetry to middle and high school writers at the Pittsburgh Creative and Performing Arts school (CAPA). He is one of the founding editors of Beautiful Cadaver, which publishes social justice-themed anthologies and stages theatrical performances. His poems are published in Christianity and Literature Journal, The Laurel Review, and the Santa Fe Literary Review.