The city cinches its peripheries,

doubles the edges of its charts like they’re loose change.

I scramble for memory of space—

hippocampus dialed in and dialed back—receding,

Two years ago, it narrowed to a single city block

in Park Slope—I learned the textures of its burgundy stoops,

traced the curves of its railings

and the crowns of its birches, settling

my sights on the corner brownstone.

In I went, organizing ice cream scoops and strainers,

memorizing the calico paint of its radiators,

the wisps of dust that bobbed in the air of its vents.

Since then, the city’s gotten even smaller,

only for you—the oyster-shell sheen of your hair

fits barely, the jousting pathway of your laughter

as aimless and voracious

as a wolf in Manhattan

paces the bus lines that run

late into its morning and clear off its page. 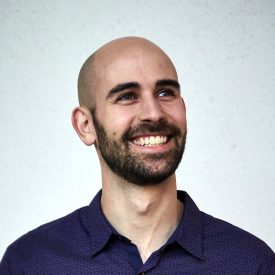 Jake Goldwasser is a linguist, cartoonist, and poet based in Brooklyn. His work can be found in The New Yorker, The Spectacle, forthcoming in The Fiddlehead, and elsewhere. He is interested in art that explores uncertainty in humans’ relationships with language, the environment, and the future. Find him doodling on Instagram: @jakegoldwasser.