The earth, not its black dirt but the fire at its core,
draws everything in—our houses, our bones,
even time, the seconds

passing more slowly at sea level than in the mountains,
more slowly on the bottom shelf of the bookcase
than if you hang the clock on a wall.

What should we do with this knowledge? Spend our summers
walking briskly in the thin air of the mountains
or dozing on a towel gritty with sand,

one of the islands that will soon follow Atlantis, its monuments
and its trash cast equally into the sea?
An old game,

asking what you would do with an extra hour
if you had one. The rules won’t allow us
to return to that meadow

soaked in dew, stars shooting across the August night,
your younger self in the sleeping bag next to mine. 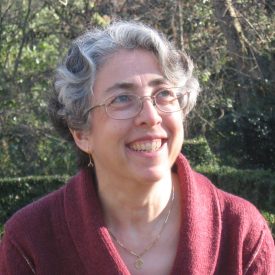 Susanna Lang’s newest collection of poems, Travel Notes from the River Styx, was published in 2017 by Terrapin Books. Other collections include Tracing the Lines (Brick Road Poetry Press, 2013) and Even Now (Backwaters Press, 2008), as well as Words in Stone, a translation of Yves Bonnefoy’s poetry (University of Massachusetts Press, 1976). A two-time Hambidge Fellow and recipient of the Emerging Writer Fellowship from the Bethesda Writer’s Center, she has published original poems and essays, and translations from the French, in such journals as Little Star, New Letters, Prairie Schooner, december, Verse Daily and American Life in Poetry. She lives and teaches in Chicago.