The mist-infused mountain vista on the cover of Carolyne Wright’s This Dream the World: New and Selected Poems invites the reader to enter a poetry landscape that is dense and multi-hued. The cover painting presages reflective poems by a poet who traveled widely, learned from the best, and taught in a variety of settings. After sixteen books, chapbooks, and many translations to her credit, this Pacific Northwest-based poet, editor, and teacher presents her oeuvre for the first time. This collection presents work that spans forty years, with poems from Wright’s five full-length books, as well as beginning with a first section of new poems written after 2011.

The opening poem, “This Dream the World is Having about Itself,” uses lyric couplets to conjure two sisters, one speaking to the other, “That summer in our late teens we / walked all evening through town – let’s say Cheyenne – // we were sister’s at the prairie’s edge.” The speaker also foreshadows turmoil, “Your lungs // were filling with summer storms, and my eyes / blurred before unrefracted glacial lakes.”

Wright frequently gives a nod to significant poets who have taught her, some of them being Elizabeth Bishop, Madeline DeFrees, Richard Hugo, Donald Justice, and William Stafford. The opening poem takes its title, as well as the book title, from the first line of a Stafford poem, “Vocation.”

Wright’s long ten-page poem in six parts, “The Mute Sister Sequence,” immediately follows in this first section. The lyric narrative seems to acknowledge and come to terms with a family secret, as the mature poet considers her earlier life, as well as some choices made by her parents. The speaker introduces her disabled sister, Maurine, who lived most of her life at the Rainier State School institution, apart from her family in Seattle, a practice not uncommon at the time. The story becomes a family curtain of silence that Wright lifts to shed a brave light on her youth. Regarding this “The Mute Sister Sequence,” Wright states in the “Notes on the Poems” section, “This poem is only indirectly autobiographical: I never walked anywhere with my older sister, who had suffered extreme trauma at birth and lived in an institution almost all her life. But her presence-in-absence resonated throughout my childhood … and has had a persistent influence.”

Since Wright shares personal history about her sister in the “Notes on the Poems” section, one wonders if the last lines of the ghazal, “Woman at the Well,” might allude to the poet as a sister as well as to the Biblical woman (see John 4:4-42 for the story of Jesus meeting the Samaritan woman at the well) and contemporary women, “Oh artisan of sorrow, mystery’s precision, sit down / beside your sister, second self, the woman at the well.” Wright begins this ghazal with “Millennial fissures in the well-rim” which makes a deft reference to the very first poem in the book, “This Dream the World,” in which the speaker calls to her sister, “You carried your final thoughts / almost to the millennium’s edge.” Thus, an affirmation of a sister, perhaps a second self.

Poems from Wright’s books bridge several decades to reflect on a young woman’s risky and romantic travel adventures in foreign lands. She writes in “The Cosmic Scholar:”

Secretary to the thoughts of others,
I grow, each night, to be the tenured scholar
of all galaxies. I gaze out
at the ancient history of stars – lights,
years old and centuries apart.
Anywhere we are, my text tells me,
is the center of a universe
on the exhale.

This poet places herself in the lineage of notable Pacific Northwest poets who use nature as an agent for poetic insight. The poem, “Boredom, Nevada,” dedicated to Richard Hugo, begins with imagistic hyperbole, “The air’s so flat with salt, dust sweats.” Wright excels in shorter nature poems with imagery and personification, as in “Heading for Cover: Great Salt Lake, Utah,” where she paints a still life, “The moon sits on the water, / a cracked plate on a table,” then lulls the reader at the end,

Cover us, night.
We must depart in secret.
Still here, still here, the killdeer’s
whistle mocks. Everywhere we step,
broken stacks talk back in the dark.

Many of Wright’s earlier poems are place-based and demonstrate a poet interested in travel and who is fascinated by other cultures. One particular place she writes about is Bahia, Brazil, where the speaker considers different lives she might have led if she remained in Bahia. Throughout these poems, the speaker navigates cultural shock, difficult choices when young and in love, and the ways that social chasms intermingle. For example, dangerous experiences with murder and social upheaval arise in the four-page poem “Wander Luis” where the narrator tells how Luis found his brother:

“We found his body
in the high grass, bound hand and foot
and blindfolded.” Suicide,
the uniform at the guard post
shrugged, turning up his soccer game.

In the same poem, the poet writes “And Brasil mulatto, laughing and talking / all night, drinking cachaça and slave coffee / to forget the parrot perch.” The poem refers to unfortunate miners, “Three thousand men / a year who give themselves / to the knife-samba,” mining, drinking and dying, “within sight of the Sheratons.” The speaker recalls a fear that pushed the girl in the poem away from Luis, a new-found love in Brazil. What is the reader to make of Luis’ letter to the young American woman that she made a choice not to answer?

“Where are you now, Eugenia?” Wright asks in the poem, “Eugenia,” about a girl sponsored through the Save the Children Fund for eleven years until the correspondence suddenly ended. “My letters come back unopened.” Several references to choices continue and may resonate with readers as they review the course of their own lives.

In the entire final section, “Mania Klepto, The Book of Eulene,” the poet creates another speaker who, in community poetry readings, Wright calls her “alter ego.” These persona poems don’t seem on the surface to suggest personal narrative, but are spoken by a woman, described in the “Notes on the Poems,” whose poems “struggle forth from the creative primal ooze.” What fun it must have been to write in “Eulene Goes Back to Godhead” that “Eulene knows her karma is to offend everyone / just once” and that her “path has always been the one / of most resistance, but now / if she can’t join them, she’ll beat them.” These spirited poems often contain gems of Eulene’s pithy wisdom. Writing through a persona may give the poet leeway to be unruly.

A psychological explanation for these poems could be entertained, but wry humor might be what the author intends. In the poem with the same title as the section, Wright describes the inception of the poem “Mania Klepto” in the “Notes on the Poems” section. She states that the premise came from a Jerry Lewis joke: “what if someone felt compelled to go into stores and put things there instead of shoplifting?” Such notes entertain as well as inform the reader. But neither Wright nor Eulene tell all their secrets.

Thus concludes Carolyne Wright’s diverse collection that constitutes the arc of her decades of compelling poetry. Wright uses formal as well as free verse while deftly employing slant rhyme, lyricism, imagery, description, rhythm and enjambment. Her vast array of skills come into play when she writes about challenges in the life of the speaker and in the lives of women encountered in several cultures.

This Dream the World: New and Selected Poems was published by Lost Horse Press in September 2017. To find out more about the title, visit their website here. 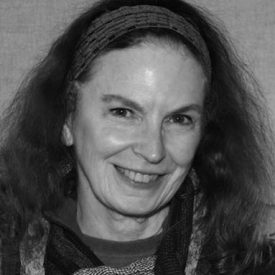 Carolyne Wright’s most recent poetry collection is This Dream the World: New & Selected Poems (Lost Horse Press, 2017), whose title poem received a Pushcart Prize and was included in Best American Poetry 2009 and the Pushcart Prize XXXIV: Best of the Small Presses (2010). She is the author of nine earlier books of poetry, including Mania Klepto: the Book of Eulene (2011); A Change of Maps (2006), nominated for the LA Times Book Award, and finalist for the Idaho Prize and Alice Fay di Castagnola Award; and Seasons of Mangoes & Brainfire (2005), winner of the Blue Lynx Prize and American Book Award. Her poetry, essays, and translations appear in magazines such as Arts & Letters, the Iowa Review, New Letters, the New Yorker, North American Review, Poetry, Rattle, the Southern Review, Tahoma Literary Review, and Triquarterly; and in anthologies such as Discoveries: New Writing from The Iowa Review, Poetry 180: A Turning Back to Poetry, and The Vintage Book of Contemporary World Poetry. Her coedited anthology, Raising Lilly Ledbetter: Women Poets Occupy the Workspace (Lost Horse Press, 2015), received ten Pushcart Prize nominations and was a finalist in the Foreword Review’s Book of the Year Awards.