Nancy Krygowski’s radiantly honest, compelling new volume is an exciting addition to the ranks of outstanding new poetry books. The Woman in the Corner, her second poetry collection in fourteen years, joins her first book, Velocity, which won the 2006 Agnes Lynch Starrett Poetry Prize for an outstanding first full-length book of poems. Commenting in a Poets and Writers interview on February 25, 2020, Krygowski explained that between the two books, her life had changed a lot and “in this new life I had trouble locating myself as a writer.” The poems in this new book show her regained lyric identity as she explores challenging themes—aging, complexities of sexuality, parenting, marriage, family dynamics, friendship, and American culture. To the problematics of living, Krygowski’s poems assert a yes so nuanced, so musical, so driven by stunning images that her readers recognize their own lives.

Each of the volume’s four sections opens with a poem whose simple, direct question belies complexities beneath it—age, name, origin, self-definition. Thus, chronological age measures only one aspect of the layers we contain; names we give ourselves and that others give us say a lot about where and why we are; ethnicities are givens but needn’t confine; our identities accrete about us like onion layers—we are all, and more. As Krygowski writes, “Sometimes what happens in outer space / is less puzzling than what happened yesterday.”

The eponymous poem refers to the biological mother of the speaker’s adopted daughter, a woman eventually diagnosed as bipolar, whose chemical imbalance made her unable to mother the daughter to whom she gave birth. Hence, Krygowski as adoptive mother who taught her daughter to skip, use tampons, and now, abandoned by that daughter to college life, must learn to live with what seems indifference. The final poem of the book, though, shows that daughter mothering her mother as she repeats names of flowers she remembers Krygowski loving, “azaleas, plumeria, hydrangea.”

The identity of the woman in the corner, however, is wider than that of the birth mother. She becomes any woman who has felt a mother’s blows, heard a daughter ignore her, a man threaten her or call her degrading names. In such painful circumstances, a woman may retreat into the corner for solitude, for reflection, for space. Though the corner may be a temporary refuge, Krygowski’s speaker has learned she has agency; if threatened, she kicks back.

The poet has a genius for stunningly apt images. In a poem about a woman dying, Krygowski writes that her friend “doesn’t condemn // the cells pimping her energy, bittering her limbs.” Through the word “pimping,” the reader understands cancer in a new light, its likeness to a procurer acting for itself, draining its host. In the line that opens “Heavy Cream,”—“Oh thrift store of a heart”—the metaphor suggests the inadequacy a person feels in trying to help another person through a tough situation. Another image gives the reader an unforgettable association: “You know how the tip of a soft serve cone curls like an unanswered / question.” Countering the claim one hears too often, that all will be well, Krygowski offers the correction, “all is well / or all is well enough.”

When the speaker’s husband asks whether she can tell the difference in the way his car drives with a new part in it, she responds:

I take a moment

then say hmm, yeah
not because I believe it’s true

but because, overall, I believe.

She believes, that is, in him and in their marriage. Her answer registers emotional truth rather than lived experience. Emotional truth is key to this volume. Nancy Krygowski has lived through pain and understands its place in her life. She does not allow it to dominate. It flavors experience, resonates as she translates pain to understanding which becomes in turn wisdom. Readers will want to read and reread the poems in The Woman in a Corner, each time seeing more connections within and among them, coming to feel the stringent, generous company of Krygowski’s voice. 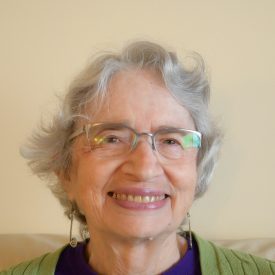 Susan Shaw Sailer lives in Morgantown, West Virginia, and is a member of Jan Beatty’s Madwomen in the Attic Program at Carlow University.

Her new collection of poems, The Distance Beyond Sight, will be published by Main Street Rag Press in August 2020. 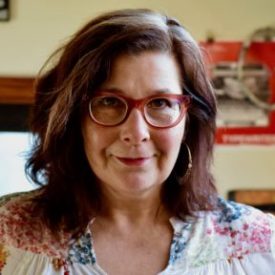 Nancy Krygowski is the author of Velocity, winner of the 2006 Agnes Lynch Starrett prize from the University of Pittsburgh Press. She is an ESOL instructor at a non-profit and also teaches in Carlow University’s Madwomen in the Attic writing workshops.