welcome. The building let the wind from the highway rub its belly smooth.
Its doors swung wide: concrete pillars, concrete floors, concrete screws
holding conduits in place
and the body said, No. The body said,
This is not the plot we sketched for ourselves. But the body
also bubbled in the semi-abandoned dark, which spoke.

Here is a canister of spray paint, the rag soaked in chemicals. Here’s the PVC pipe
stretching floor to floor,
punched through with holes.

Here’s a sack of drained Milwaukee’s Best, engine in an aluminum tube, the revving
and the revenant. Here is the outlet, the room’s defunct face; the expressionless
cables like threads of dead-thoughts streaming up
from the head into a frayed oblivion.

in the drywall between aluminum studs, until suddenly, no floor.
Meanwhile,
something on the lowest story moved like the wind
tongued it across the floor and up, up, up—

a sheet with folds so fresh they jutted like ribs under the skin
of a crash victim.
Like a shadow of a man throwing his fists across
a kitchen
how they broke along the corners, how an edge severed them,
the sheet came to rest on the stairs.

A toppled pitcher of milk
congealed, the skin imitating the repeated right angles beneath it.
Then the sheet moved as if sucked through a straw and vomited out
a few steps later.  The wind picked up

and the light dropped down the long hole, story to story.
The vertical hallway between here and there
and here were the doors to here
and there the makeshift doors
fabric draped loose from the frames like a body drowning in gravity.

The body spoke, and the building replied. One note and the next.
The mouth went slack, and the face hung from the brain’s hook,
like a sheet on a wire to dry
under a sky ripped on god

knows what. The sheet hovered into the room, edges fluttering.
It’s night. It’s noon. The body drove the wind
and the wind
reclined on foam piled like a chaise
lounge against the wall. The wind grew hands, hands wrapped
in the most delicate skin. The hands
lunged at the sheet
and snatched it out of the air
like criminals in the back
of a convenience store. The sheet fought back. It struggled

to right itself. Far away, a window shattered, and the light tumbled
down the building
and onto the highway, where it was taken, car to car, into the next city.

The sheet squirmed but could not free itself from the wind’s
tight grip.
Here was the wind, here was the body; here was the sheet,
its minute chloroform, its sack of Milwaukee’s Best passed around

and consumed as if it were nothing.
I have been nothing. Nothing
for a long time. Nothing drinking nothing. The wind said,
This new skin is acceptable. What do we do now? Do we talk?
Here, in the dark
abandoned building?

Unbuilding, the building responded. I let go of the sheet. It hovered
above the body.
I was on my back. It was on top of the body. I raised a hand
to touch it. The sheet gulped like a long windpipe turning a marble
over and over

Then the wind spilled in and pushed the body back into itself,
then the light
bubbled up from the floors, then the light left the body to wait
and the wind
lifted the sheet from the body, lifted it long enough for me
to see the holes where the eyes had been rubbed raw,
and then the wind tore the sheet away,

the sheet bunched around the wind as if the wind were a needle and thread.
It flew out of a window and down to the highway
where it rode the updrafts for awhile until the cars
mutilated it 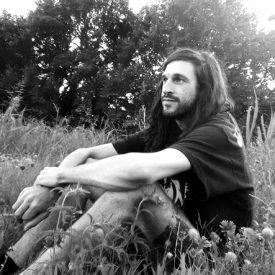 Brian Clifton has work in Pleiades, Guernica, Cincinnati Review, Salt Hill, Colorado Review, The Journal, Beloit Poetry Journal, and other magazines. They are an avid record collector and curator of curiosities.