If you cut a tree open, slice it down the middle, you can read the history of a day. Here, on this day, a frog opened its mouth to sing with all the joy and volume it could muster from its little body. A casual onlooker might be amazed that such a large voice could come from such a tiny creature, but a scientist, one that specializes in studying frogs, might appreciate the song but wouldn’t be so amazed. If you were to put your head next to a tiny meadowlark while it sang, you’d be similarly impressed at its volume. Much of nature expresses itself in screaming. These are the things that trees laboriously record in microscopic twitches found in their rings.

A gigantic, long-legged gray heron slowly stalked through the water, heading directly for the place where the frog was sitting. The frog wisely leaped into the water and splashed its way to the safety of the mangroves soaking along the shore. The bird turned its head sideways to stare into the water, as if trying to decide if the noise it had heard could have been coming from the tiny silver streaks of fish that brushed past its feet, all too small to bother with. It stood that way for several moments, its tiny black eyes flicking from the empty lily pad to the water again before stalking off, on the hunt for something new.

The frog stayed in its hiding spot for several more minutes. Its skin grew cold in the dark shade of thick Spanish moss and twisted mangrove branches. It waited until the bird had reached the far beach, then ducked beneath the water and swam back to the warm patch of sunlight. It didn’t dare sing again, but huddled contentedly against the flat green of the lilypad, long toes tucked beneath its soft, white belly. The soft current gently stirred the leaf, and a few passing fish bumped against its prickly underside, but otherwise, the frog was left perfectly alone. Along the shore and inside each and every tree, the stillness was cut and recorded as a straight line, as sure as dead air on a vinyl-cutting lathe. In a human composition, this sort of silence would register as a moment of tension or as an ending, depending on where the silence was placed within the song.

The sun climbed and climbed until it grew too hot to stay out in the open, and the frog leaped off the lilypad and back into the cool, dark water. All around passed the shadows of turtles and fish, but most were too far away to be any immediate danger to the frog. It kicked hard with its back legs and swam to the nearby bank of the pond, settling into a muddy niche between two twisted tree roots, a spot swarming with tiny gnats and close enough to the water to catch passing water beetles.

The day passed on this way: comfortable, relatively uneventful, safe. A line of silence, like so many others before it and so many more to come. Occasionally, the surface of the water fluttered as a snapping turtle rose suddenly to the surface to take down some prey, or an orange-finned carp ecstatically jumped out of the water entirely. The sun eventually retreated for the day, replaced by the pale outline of a twilit moon. The air cooled. The frog swam out of its hiding place to sit once more on its favorite lilypad. It had just opened its mouth to sing when a noise as big as anything it had ever heard shook the pond.

Here—if you look where I’m pointing, you can see it. It’s that jagged dip and rise in the line, as if the needle had been hijacked, followed by another. The subsequent up-and-down shudders are from the fish crashing against the surface before diving to the bottom of the pond, where the birds flew out of the trees in great, screeching clouds, where the great blue heron took the air and flew away, the tips of its massive wings clumsily breaking the surface of the water in two messy rivulets.

“What should we do with him? Should we just leave him here?”

“Might as well. Nobody ever comes down here anyway. A couple good storms, and no one will be able to tell we were ever here, either.”

Two men, the first to visit the pond in a while, stood a few feet from the edge of the pond, unnoticed by the frog until now. Between them, lying on the ground, was another man, his face pressed so far into the mud that breathing would have been impossible.

“We should get out of here,” said one of the standing men. He looked around nervously. Birds were beginning to cautiously set back down in the trees, and a rabbit, scared temporarily into a comatose shock, slowly shook itself to consciousness and hopped back off into the trees.

“Oh, relax.” The first man scowled. “There’s no one around to hear anything. You want to go get a beer or something?”

The second man laughed at the first man’s discomfort. “Relax. A couple of beers from now you’ll forget we were even here.”

The frog stayed pressed against the side of the tree roots until long after the two men had left. Somewhere overhead, an owl hooted, unperturbed, a late-comer to the scene. Crickets filled the silence of the evening, their whine dutifully recorded by the surrounding forest. Fireflies dotted the muddy hollows of the meadow. The little green frog crawled out of its hiding place to rejoin the buzzing night, chasing after tiny gnats and mosquitos, each skip and hop taking it closer and closer to the body on the grass, until one last leap took it high and onto the middle of the man’s back, near the wide, red hole that still weakly pumped blood. The little frog stood in the growing stain for a moment, shivering from surprise and pleasure at the unexpected heat. 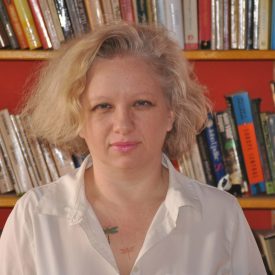 Holly Day’s writing has recently appeared in Analog SF, Earth’s Daughters, and Appalachian Journal, and her recent book publications include Music Composition for Dummies, The Tooth Is the Largest Organ in the Human Body, and Bound in Ice. She teaches creative writing at The Loft Literary Center in Minneapolis and Hugo House in Seattle.