finger reaching for the soft skin where ear

left ghosts behind, their lure not enough to quell

used to bleed you into submission, deliquium

animi, but now the symphony I orchestrate is

I give you a little push to make the lungs inflate,

the ventilator expanding and retracting the heavy

blooms inside your chest. Sevoflurane is such

a wonder, though no one can really say

how it manifests unconsciousness, crossing from

the lungs into the blood and from the blood

to the brain. But then what? Isn’t a little mystery

the price we have to pay to see the magic? Yes,

But what makes this so different from daily

life? The avoidance of, or rush toward, the death

drive, the push and pull of consciousness—

exhausting, no, trying to be so goddamn present?

I’m never able to leave my own self behind,

to abandon this dull, known world where every

of perception—is mine alone, incomparable.

Descartes thought the pineal gland was the place

where all our thoughts were formed but still

insisted whatever kernel of light lived within

to be ineffable. And lonely. The knotted brow

of agony has been smoothed for ever, declared

Holmes after they pulled the gleaming tumor

from the sleeping patient’s neck in the Ether

Dome. And the only sacrifice you must make

is memory. What can link us then, if not brief

Earth will outlast us—there’s no concern

about that. It’s everything else we’ll raze

in the process. But for now, patient, relent:

the miracle of anesthesia transcends pain.

of imagination within the deep bone

bowl of your skull. See what you can find

down there in your unconscious—you won’t

be able to bring it back, but you’ll be different,

you’ll return to it in dreams, some great new

skein of sky for you to unfold. All I ask for

is the knowledge that keeps me awake

at night: when you sleep, when you dream, 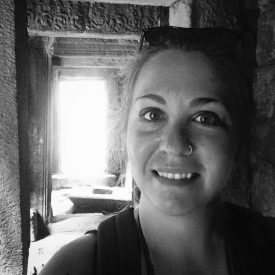 Theadora Siranian is a graduate of the MFA Program at the University of Massachusetts, Boston. Her poetry has appeared in Best New Poets, Ghost City Press, CONSEQUENCE magazine, Rust + Moth, and Atticus Review, among others. In 2014, she was shortlisted for both the Mississippi Review Prize and Southword’s Gregory O’Donoghue International Poetry Prize. In 2019, Theadora received the Emerging Woman Poet Honor from Small Orange Journal. She currently lives and teaches in Kazakhstan. Her chapbook, She, will be published as part of the Seven Kitchens Press Rane Arroyo Chapbook Series this summer. More of her work can be found at theadorasiranian.com.