I would come home from school, drink a six-pack
and iron five white shirts in the basement.
Aunt Liz would be asleep in her chair
upstairs, her Alzheimer’s relaxed for the moment.
In the basement the steam iron hissed and spouted
over Oxford cotton. I averaged fifteen minutes
per shirt. Bare bulb over my head, I pushed
the iron until after midnight, until Friday
became Saturday. Neatly arranged on hangers
the shirts hung on the clothesline like ghosts,
reminders of a stress-ridden profession.
My aunt’s hearing loss prompted her to turn
the TV so loud that The Late Night Show
echoed through the floor.

Finished ironing, I emptied extra water onto
cement, reluctant to climb stairs back into
claustrophobic caregiving. When I entered
the living room, I saw her head sagging
onto her chest like a Raggedy Ann doll.
Timers had turned off lamps, but a path
of television light streamed across the
carpet like a lighthouse beam. I shook
her shoulder, and she awakened wide-eyed.

After she’d turned off the TV and gone
to bed, I returned to the living room
and sat in her chair, looking out the window.
The streetlight spread its light across
the marble windowsill, and I stared at
it until I slowly vanished into the shadowy
freedom of sleep. 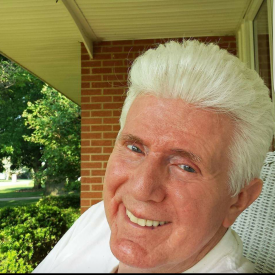 R. Nikolas Macioci earned a PhD from the Ohio State University, and for thirty years taught for the Columbus City Schools. In addition to English, he taught drama and developed a writers’ seminar for select students. OCTELA, the Ohio Council of Teachers of English, named Nik Macioci the best secondary English teacher in the state of Ohio. Nik is the author of two chapbooks: Cafes of Childhood and Greatest Hits, as well as seven books: Why Dance, Necessary Windows, Cafes of Childhood (the original chapbook with additional poems), Mother Goosed, Occasional Heaven, A Human Saloon, and Rustle Rustle Thump Thump. Critics and judges called Cafes of Childhood a “beautifully harrowing account of child abuse,” but not “sentimental” or “self-pitying,” an “amazing book,” and “a single unified whole.” Cafes of Childhood was submitted for the Pulitzer Prize in 1992. In addition, more than two hundred of his poems have been published here and abroad in magazines and journals, including the Society of Classical Poets journal, Chiron, Concho River Review, the Bombay Review, and Blue Unicorn.