While my wife and child drink slurred silence
of sleep and beads of sweat
from a cloudless day have dried, I rise.  Cicadas

thread scratched voices, tree to tree when I pass.  Dogs bark
their Benedictus then return to Sunday rest as half
a moon clears the cloud litter and Dreamland

Latimer, then two blocks down Frankfort Avenue to banked earth
where last train cars idle, a wall of broken
Morse code between this land and the other—black, white, black.

I know I will find you crossing like some drunk, half-dead
doughboy who stumbles from his trench and can’t
return to either side. I wait for the roar, the terrible

vanishing, a plume of viscera and bone, but there are
no mines here, just miles of keep-out track—
the Santa Fe and Great Northern Lines and coyote’s

black shadow as she picks her way between
Greenwood and Tulsa, rooting out voles, a fractured
squirrel, to bear to her litter.  Some nights, murmured

words from the other side, drawn guns that flare with oil
drum fire.  Are we ready?  When silence healed
over the Arden, we carried home Springfield, Enfield,

Mauser, Lebal.  Some nights, I wait until first light
when the dark wave of maids, porters, gardeners will cross
over.  Tonight, only coyote in the broken coda passes

safe between the stutter of track and shadow,
of starlight and shade.  I am silence, nighthawk, the grave. 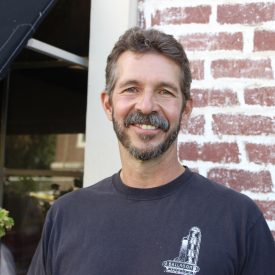 Markham Johnson recently won the Pablo Neruda Prize from Nimrod, and his poems have been published widely.  His book, Collecting the Light, was published by the University Press of Florida.