Driving down or up Highway 13, I see a white
‘72 Dart, just like mine, turning down a side road.
True, it’s been years since I was last in love,
since someone considered winking at me.
And years since I’ve seen anyone buried or born.
I haven’t gained weight or lost much. But forgive me,
I’ve gone off with that other me, going the other way,
barely stopping at crossroads, cigarette in the mouth
like a baby cobra. He’s swerving, hardly seeking the road,
foot floored, red-eyed again. I’m out of sight now,
whose heart is gaining, all four hooves in the air
and a rifle pointed at the moon. A posse a hill back,
waxed mustaches blazing like torches.
And if I’m with that other me, who’s this with me?
Sipping coffee, adjusting mirrors, slowing down
at yellow lights? Where is he and is he on time?
Did he show up for the cake, his daughter’s solo?
Did he remember to send a card or flowers?
I hope so. I really hope so. 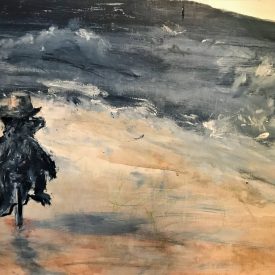 Dustin Nightingale lives in Hartford, CT. His chapbook Ghost Woodpecker is available from BatCat Press. Poems have recently appeared or forthcoming in Colorado Review, Florida Review and The American Journal of Poetry.