Angeline is packing up her books, putting bubble wrap around the two or three framed prints worth keeping, throwing away our stuff without asking me if I want any of it. I have purposefully brewed a pot of tea in her favorite oriental kettle even though she will want to take it, used the malformed cup her nephew made for her when we moved in together. It says, “To Ants,” which was once a cute misspelling of “Two Aunts.” Now, it seems like a prognostication for why our relationship would ultimately crumble: I spent too much time poring over my essays devoted to the rhetoric of female orgasms, and Angeline just spent too much time gardening.

I don’t bother to help with her packing, instead, I wear the new mismatched Victoria Secret pajamas she bought for our recent anniversary. I don’t know how to explain the fact that I am hesitant to get them dirty. I take my cup of tea out onto our deck, and the cool air of early spring comes up through the pads of my feet, sending goose-bumps up the thick skin of my legs.

There is just no time left to exercise the way I would like.

I sit on the edge of the deck, while Angeline bumps things around noisily inside our home. We haven’t even discussed the mortgage yet or what to do with the cat.

There are tomato vines in planters placed all over the backyard, and the smell reminds me of really good pot, the stuff from back when we were still in love and smoked it to relax and not just to get by, and when I pull a tender vine closer to get a better look, I can see a fat white caterpillar struggling along the fine tiny hairs of the stem, slipping and catching as it climbs, then it stops to fatly chew. It looks content, if a caterpillar can experience such a thing.

I pluck it from the vine and am about to pinch it between my fingers when something stops me; perhaps pity, perhaps the recognition that it wouldn’t matter in the end. The caterpillar struggles valiantly against the soft pressure of my fingertips, and it occurs to me that this worm is like us, reforming the universe while simultaneously destroying it.

I realize that Angeline would hate this analogy, call it more of my academic calisthenics, and the tea in her shitty nephew’s cup is tepid. I always complicate the simple, she would say. I drop the caterpillar into my cup, watch it flounder in the warm embrace of the tea, and it takes the insect much longer than I imagined it would to slowly founder and drown. I break the handle of the cup off on the edge of the deck. It is this broken cup and this dead caterpillar that I leave on the deck for Angeline to find, and consider. 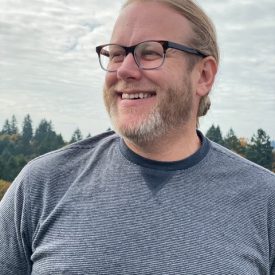 Seth Brady Tucker’s second poetry collection, We Deserve the Gods We Ask For (2014), won the Gival Press Poetry Award and went on to win post-publication awards including the 2015 Eric Hoffer Book Award. His first book, Mormon Boy, won the 2011 Elixir Press Editor’s Poetry Prize. His poetry, essays, and fiction have appeared widely. Seth is founder and executive director of the Longleaf Writers’ Conference at Seaside, Florida, and he teaches poetry and fiction workshops at the Lighthouse Writers’ Workshop in Denver, is a teaching professor at the Colorado School of Mines, and is the senior prose editor for the Tupelo Quarterly Review. He is originally from Wyoming, and once served as an Army 82nd Airborne Division paratrooper in Iraq.