Go down Fredericka, take a left on Clippen, another left after about a half mile and you’re on Evergreen. That’s where the Goodes’ house was, middle of the right side. The street ended without a turnaround, just the white board fence for the horses. Whose horses they were we never knew.

Word traveled fast when people found out the mutt the Goodes got from the Humane Society could tell if you were lying. Lots of folks at the reunion—people you wouldn’t expect—told us they visited it. Oscar, the collie-beagle-other mix, was ostensibly a birthday gift for little Garrett Goode, but ownership quickly spread to the rest of the family and, eventually, the neighborhood. If Oscar came home with our dogs, we would fill up another mixing bowl with kibble and let him at it, but he always slept at the Goodes’. Mr. Goode was a shadowy figure, a chemist at Thoroughbred Tobacco before it was bought, and the only dad on the street who still wore a hat to work. Everyone was cautious around him. Mrs. Goode was that type of church lady who used the fifty-minute service on Sunday to absolve her venials throughout the rest of the week; she was an incorrigible gossip and didn’t have the class to hide her smoking, as our mother did. That’s how Oscar’s gift was discovered, because of Mrs. Goode’s big mouth.

We had a round of capture the flag going, us and the Hendrixes and the Schwarzes, when snot-nosed Garrett and his older sister Allison came over and asked if they could join. Garrett was usually not invited to local games on account of his penchant for hysterics when he lost, which often brought the adults into our sacred summer world, but we liked Allison. She was foxy, and good to her punk younger brother. We let them join, and Garrett started talking about the dog before we could re-establish teams.

“Oscar can read people’s minds, like Professor X,” he said. “He knows liars.” He wore a big grin, smug and edentulous. We looked at Allison for an explanation. She had that dramatic pissed look only preteens can fabricate, overwrought as they figure out the plasticity of their own faces, and she grabbed a fistful of Garrett’s striped t-shirt, baring her teeth at him.

“What’s he talking about?” one of us asked.

Allison was elegant, unlike her mom. She regained composure and rolled her eyes in a convincing way. “It’s nothing. My mom is just confused again. She thinks the dog was telling her something about Mrs. Medley.”

“Shit!” Garrett squeaked. He probably meant the bull variety, just didn’t know it yet. “I saw it too! Mizz Medley was sayin’ that Mr. Medley is on work to Albuquerque, that’s why he ain’t been at church, and Oscar started barkin’ at her. He was barkin’ right at her!” Garrett erupted into the self-satisfied belly laugh of a child, not understanding how mean it was. All us older kids knew that Mr. Medley had been gone since Mrs. Medley was pregnant and then not, but no baby carriage, but Garrett wasn’t around for that. Allison slugged her little brother’s shoulder with admonitions of grammar and said it wasn’t a thing, that their mom just had some ideas about Mrs. Medley. We thought about the dog that night, talked about him in our bedrooms, under the covers.

It would be nice to say we went across the street the next morning and used the scientific method on Oscar, graph paper and controls and all that, but we were busy at the pool most of the summer. Oscar’s specialness didn’t enter our minds again until we saw Father José’s Chevy pull into the Goodes’ driveway. We couldn’t believe our eyes. We all suspected that Mr. Goode might be an atheist, so why was the Father making a house call over there? We pedaled our bikes around to the side of the ranch-style, really pumping as the tires sunk into waterlogged grass, and popped out kickstands underneath the kitchen window. We heard voices inside.

When we looked in we saw the Father, Mrs. Schwarz, Mrs. Goode, and Garrett in a semicircle. Mrs. Goode was the only one seated and had a cigarette lit, and Garrett had his arms around Oscar’s neck affectionately, kneeling on the linoleum. The other two grownups were standing hipshot with their arms crossed. They were all looking down at Garrett and Oscar while Father José politely batted away the smoke curling its way into his face.

“It is rather peculiar, Mrs. Goode, I’ll give you that,” the Father said. “He’s such a well-behaved pup when people aren’t talking. I don’t see how a canine could understand the human world of truth, though. I appreciate your invitation, but I think the Lord communicates in ways that are easier for us to interpret. Take the burning bush, for instance; now that is a miracle I would’ve loved to be present for!” The Father spoke very good, very accented English, and the church ladies loved it. They could flirt with their benign brown priest-boy till the cows came home, not for a second fearing he might be more holy than themselves. Mrs. Schwarz laughed hard at his non-joke, but Mrs. Goode had a tired, dead look in her eye.

“I’m sorry Father, but you haven’t been listening,” she said. “The dog doesn’t bark when people talk. He’s not barking right now–look. He’s sitting there pleased as punch with Garry, not a peep out of him. Now watch this.” Mrs. Goode stood up and walked across the room and we all ducked down, ears pricked for whatever came next.

“I. Have. Never. Sinned,” she said, much closer to the window. Immediately we heard a painful howl, loud as dynamite. When it died down, we could easily imagine Mrs. Goode’s palms out, eyebrows high, as if to say See? See? But nobody said anything for a while.

“It’s very strange, Mrs. Goode, but I don’t see what I should do about it. I can’t very well go to the archdiocese with a polygraphical dog,” he said in a pleasing Peruvian voice. We stayed around the side of the house till we heard the Father’s car turn over and back out the driveway, watching the rusty beater leave our no-lane street.

The next day we knocked on the Goodes’ front door. Mrs. Goode opened it, wearing slippers and pajamas, unlit cigarette in hand. She looked even more tired than before.

“You want to play with the dog? Fine, that’s fine. Take it. Just don’t bring it back for a few hours.” Allison followed us out of the house with a skittish stealth about her, like a recent convert afraid of committing some unknown infraction. Oscar trotted along beside us with no leash, and by the time we got to the Hendrix’s backyard we were pretty well convinced this was just another sable mutt, happy and well-trained and utterly average.

The Hendrixes went first. “I got three homers last season,” said Eli. This was a baseline statement, because he really had, and privately we all thought it an obvious way for him to remind Allison that he was the best ballplayer. Oscar sat there, panting with a grin, otherwise silent. Allison was watching Oscar so intently she didn’t seem to register the brag.

Chip went next. “I can hit a bullseye from one-fifty with my grandpop’s Winchester,” he said. Oscar started growling, quickly escalating into a series of menacing yelps. “But it’s true!” Chip protested. “I did it last week! I can show y’all the target!” We were laughing at him, and then realized we all believed this dog had some kind of superpower. Soberly quiet, the gravity of the situation was setting in. Chip was sullen, upset we trusted a mongrel pooch over a fellow human.

We said a lot more things, mostly about ourselves or classmates, trying to catch Oscar in an inconsistency. Far as we could tell he was right about everything. Turned out Mr. Chertok was indeed a closeted homosexual, Devon McFayden was stuffing her training bra, and Joseph Schwarz was afraid of inclement weather (hotly contested, but verified by Oscar). It was getting more and more stressful as we went along, unsettling how much Oscar seemed to understand us, how little explanation there was for something that by now seemed a natural law. Allison was pale. We decided to ask a question as Oscar lifted his leg to urinate, maybe hoping he would be too distracted to answer.

“Mom and Dad love each other,” we said, aware of the looks from the others. What a relief it was when Oscar finished up his pee without a squeak, promptly sitting down in it and scratching his ear. “Mr. Goode is a chemist,” we added hastily, hoping to slide our real question in with another calibration of Oscar’s accuracy. Still nothing.

“Roger and Harriet have sex,” said Eli. Roger was the oldest Hendrix brother, dating Harriet Isaacs. Oscar stayed silent. Eli and Chip giggled madly as they rushed inside to torture their senior brother, leaving the rest of us with our prophet. We were glad for the interruption, and the group gradually dispersed without any more statements, leaving poor Allison to walk home with Oscar.

That night we snuck out. It was the first time we ever did that; it wasn’t clear how we knew Oscar would be available, but sure enough he was chained to a stake in the Goodes’ backyard. He lifted his head and blinked when we crouched down and rubbed his ears for luck. We said two more things, the first about Dad and the lady in the car, the second about church. Nobody got woken up.

We can’t be sure, seeing as it was so many years ago, but it seemed like the Goodes moved out at the end of the summer. Garrett was crying on the lawn as the moving van came and was filled up with all the furniture and kids’ stuff. Mr. Goode just stood on the front porch wearing his hat, letting the burly movers carry everything. His car stayed there after Mrs. Goode,  Allison, and Garrett left for Evansville. Oscar left too, but not with the moving van. We saw Mr. Goode put Oscar in his sedan and come back without him, so no matter how many ways we thought to re-phrase our sentences we never got a chance to ask. 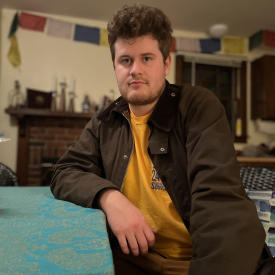 Patrick T. Howard is a writer from Henry County, Kentucky. He has a BA in creative writing from Miami University and is pursuing an MFA in fiction at the University of Alabama. His work has also been published in Happy Captive magazine.