The house is a shrug with cataract windows.
A wall surrounds it, broken with fears.
Out back there’s someone in a cage.

There’s an attic where a scream abides,
a grandfather clock chock full of secrets.
A mob is coming up the road.

Father Shotgun’s in his rocker.
Aunt Shivers glares with hypodermic eyes.
At night you’ll see the mourners in the mirror.

Rusted through, the stoveheart of this house.
The television glows in cancer blue,
and floorboards gently stain the kitchen red.

The mother, pock-marked in hate,
sings “Amazing Grace” so she won’t faint.
Outside, torches chant the night.

The Deputy descends to the cellar,
his flashlight a halo in Hell.
The time has come, there’s no escape…

There’s someone in the doorway taking notes. 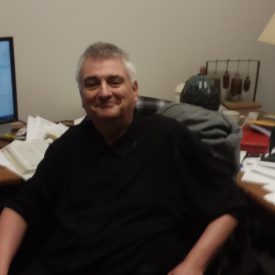 Sean Lause is a professor of English at Rhodes State College in Lima, Ohio. His poems have appeared in the Minnesota Review, the Alaska Quarterly, Another Chicago Magazine, the Beloit Poetry Journal, Illuminations and Poetry International. He has published two books of poetry, Bestiary of Souls (FutureCycle Press, 2013) and Midwest Theodicy (Taj Mahal Review, 2019).