In between news about suicide nets outside Chinese smartphone factories, Vietnamese boat people, and radioactive fish off the Japanese coasts, there is his commercial— KinBo!TM The morphing miniature menagerie from outer space! KinBo!TM The pet that fits in the palm of your hand! KinBo!TM Say his name and he squeaks and shifts! KinBo!TM Available now in fifteen shades, your new companion for only $29.95! We order him in Seaside Teal. He arrives two days later, snuffling around in his little box with the corrugated air holes. We set up his habitat. The used hamster cage with its off-kilter wheel. The water bowl because he likes to swim. The clamp-on trough to sprinkle his Magic DustTM in. KinBo!TM He’s a giraffe with spindly legs the length of our big fingers. KinBo!TM He’s a hedgehog rolling to and fro in his cage. KinBo!TM He’s a hippo quaking in his water bowl. KinBo!TM He’s a lion pacing behind bars. We watch him prowl and slither and lope through his cedar bedding. We squeeze him and risk bites. We spend our allowance on his Magic DustTM diet that looks like microbeads and smells like nail polish. Our devotion lasts a fiscal quarter.

Now on television there is the Slumbering SlubbieTM , the little creature who sleeps and sleeps and projects his dreams for your amusement. We spend the last of our good behavior gift cards. No money for a shipment of Magic DustTM. KinBo!TM swells and bloats as we feed him table scraps. The Slumbering SlubbieTM arrives via priority mail and we take it to the toy room. And there is KinBo!TM His cage is shrapnel on the ground. KinBo!TM He convulses on the floor, child-sized, tongue lolling. KinBo!TM A new, non-advertised human shape—nondescript Asian to our Western eyes, body smeared with Seaside Teal paint. KinBo!TM He is a National Geographic child, overseas factory born and raised. Maybe from those compounds where they manufacture Christmas decorations year round. Where the people suffocate from all the glitter in the air. 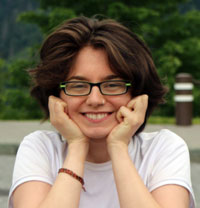 Nikki Stavile is a graduate of Hollins University’s MFA in Creative Writing. Her work has appeared in Cleaver, Scoundrel Time, and Artemis Journal. A young unprofessional, she currently resides in Pittsburgh with her partner, her cat, and an abundance of well-loved backpacking gear.