He loves going down to Norfolk’s docks
when a ship comes back from deployment,

all those sailors ringing the top deck at parade rest,
the white of their uniforms as pure as uncut heroin.

inside an Abrams tank, buttoned up and
viewing the world from video monitors

one slice at a time. He knows he was once sick
with fear of everything outside that armored skin

that wanted in, but thinking back, all he recalls
is the cramped ballet, the rumbling pirouettes,

finding his line to target, the pas de chat of loader
passing sabot round from rack to hand to tube.

and balloons, he files the postcard moment
in his memory and says aloud, as if the breeze

might carry the warning from his position
so far away into the ears of hugging couples,

Hold on to everything you’ve got. Never let it go. 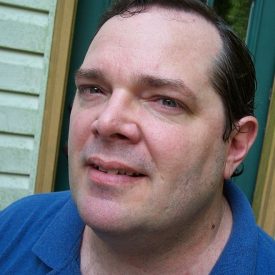 Bill Glose spent the first part of his adult life as a paratrooper going off to war. Now he leads a peaceful life and reflects upon those earlier experiences. His poems, stories, and essays have appeared in numerous publications, including The Missouri Review, The Sun, Narrative Magazine, and The Writer. He is the author of three poetry collections, including Half a Man, whose poems arise from his experiences as a combat platoon leader.