Every time it rains, the foxes pull apart

with their claws a rainbow and commence

a procession through it, walking on

all fours to the town square for a wedding.

After the weddings, all of the human denizens

of our town acquire closets full of fox fur.

At least this is what the folklore teaches

us: that what ought to be ours can be

and already is, in a way, as my friend Arthur attests

when he approaches and reveals

a tattoo of a seashell and lets me in

on a little secret. Seashell is the Mayan

symbol for zero, he imparts, because

against my will, I am in on the symbols

he steals for himself. The white

of the seashell falters against the whiteness

of his skin. Against my will, I carry the foxes

to the pyre because every wedding ends

in a massacre, according to the folklore.

According to the folklore, the heat of the breath

changes whether the mouth is open wide

or pursed into an oval. One breath is hot

and the other cold, says my mother,

who can’t find her words anymore.

And it’s raining, so I let her in on the story

of the foxes. She can’t find the word for

decision—maybe it’s dilemma, but the moment

is gone and the word with it. The grunt she

lets out is the slight hum Glenn Gould describes

alongside the piano upon which he inscribes,

with his fingers, the Goldberg Variations.

The music sitting just beside the music.

According to the folklore, losing one’s words

to the other folklore, it is an augury of what’s to come

like a pattern divulged by a pile of scat. Fox scat,

if we want to be frank, which we burn

with the rest of the animals, saving the fur.

Because the fur makes us beautiful, sailing

upon the ocean the ownership

presses its full weight against.

So I let my mother slowly forget her

words because it is time to return them.

They were a story told to her, but she forgets

the ending. Zero at the beginning and

zero at the end. Somewhere in the middle,

value. So I hum the music as if it were my own.

Something is moving, with its fingers, the trees,

as I stroll down the street trilling some of the words 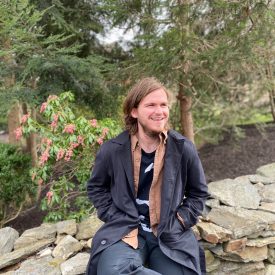 Matthew Tuckner is a writer from New York. He recently received his BA from Bennington College and will begin pursuing his MFA in Creative Writing at NYU in the fall. He also recently received the 2019 Green University Prize for Poetry from the Academy of American Poets, selected by Rick Barot. His work has recently appeared or is forthcoming in Eunoia Review, Missouri Review, and TAGVVERK. He currently works as a staff reader for the Adroit Journal and as a bookseller.