The subject produces, lures, deters, falls somewhere
between pleroma and fur, an interim unlike any other.

To pass the time, the subject gulps the day
to its glassy bottom and sees itself there, sweating

the silence until the tap hisses amber the distance
between erasure and reflection. The subject

exercises instinct, a kind of feral praxis. The subject
nuzzles pixels, holds them close, to gauge

the galaxy’s coolness, appears to embrace the voyeurism
inherent in its captivity. Instead of wallowing

in animal glory like all the world’s a watering hole,
the subject has instead learned to feel alone 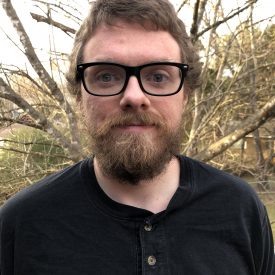 James Ellenberger was born and raised in Chicora, a small town in western Pennsylvania. His poetry and essays have appeared or are forthcoming in River Teeth, Sou’Wester, Painted Bride Quarterly, Hotel Amerika, Hayden’s Ferry Review, Third Coast, Passages North, and Beloit Poetry Journal, among others. He holds an MFA from The Ohio State University and a PhD from the University of Cincinnati.