As long as I’m inside, the rain falling outside has a beautiful sound.

Even though my neighbor’s car was stolen, and she has cancer or has had cancer, and now the street has an absence in it, like a missing tooth.

Even though I am tired of addressing you, of poems that address you and you and you.

In a minute I will get up from typing and get in the shower. So I can go out into the rain.

Why her car, I wonder. It was old. It had a support ovarian cancer research ribbon on it. It was nowhere near as interesting as the newer cars, including mine.

Why her and not us?

And only two more payments, she laughed, when she asked me if I’d heard anything that night.

No, and I’m so sorry I said, something I’d been waiting to say to her since I’d seen the ribbon on her trunk, since she’d begun losing so much weight.

You have nothing to do with it.

When I woke up last night, hearing voices, I checked that my own car was still there. Just the men in the halfway house across the street laughing as if no one else could sleep.  You fucker, you son of a bitch, you jackass.

Someone else has already begun parking in the place where she used to park her car.

I was putting in a new bulb in my front door light. The old one had blown its dome off. I’d been concerned how a house without a light would look.

The straight lines of the rain are part of its beauty.  That it sounds like someone driving through the rain. The end of a vinyl record. The aftersong.

It’s keeping all human voices off the street. Only you would sing about that. 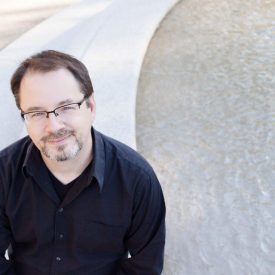 Jeff Oaks‘ most recent collection, Mistakes with Strangers, was published by Seven Kitchens Press in 2014. A recipient of three Pennsylvania Council of the Arts fellowships, Jeff Oaks has published poems in a number of literary magazines, most recently in Assaracus, Barrow Street, Best New Poets, Field, Nimrod, and Tupelo Quarterly. His essays have appeared in At Length, Creative Nonfiction, Kenyon Review Online, and in the anthologies Brief Encounters: A Collection of Contemporary Nonfiction, and My Diva: 65 Gay Men on the Women Who Inspire Them. He teaches writing at the University of Pittsburgh.