She got the idea from a cousin in California.
Out here, the cousin said, they do it all the time
in and out of marriage like gods.

So she imagined prying out the diamond,
letting it glitter alone in the palm of her hand.
Think victory medal. Be ruthless.

Would they let her watch the gold dissolve?
She imagined the circle of ever after writhing
in the heat of her anger. As promises melt

you’re free. For a small fee you can realign
your planets. She wore it only once
to one of those parties where everyone

talks too loudly and drinks too much.
And no one noticed, so she didn’t really need
the story she’d rehearsed, casting herself

as the heroine, foolish and young, who had not
really meant to pledge her life away.
Though she did. The divorce brooch ended up

at the back of a drawer cluttered with maimed
promises. In this life, after all,
sooner or later, everything breaks. 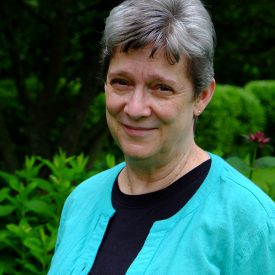 Linda Mills Woolsey is a native of western Pennsylvania whose work has appeared in Midwest Quarterly, Lullwater Review, The Sow’s Ear Poetry Review, Anglican Theological Review, Relief, Christian Century and other journals. Her poem “Bice’s Dream” was a semi-finalist in the 2016 Ruminate Magazine poetry contest. She and her husband live in the rural village of Rushford, New York.