The man should have known distance is already in her. / It moves her farther from them all, it has her / collapse on the bathroom floor heaving / obscenities into her faith and not feeling / the least bit guilty for each four-lettered cry. It has her / beating the car’s dashboard as he straps in / the boy and the girl to their seats.
It grips her
fingers into a fist, / it swells her fallen veins, it lets her speak / from someplace deep the man has never / thought to touch. It keeps her curled on the lobby couch / as he offers her name and SS# to the check-in staff. /
Her distance has her slapping the
wheelchair frame, / and then her hospital bed’s off-white sheets, its thin pad yielding / to her hands. It has her angry and restless, / unable to calm herself as the man paces the boy and girl / back and forth past her room. It tells her to tell him / to leave, to not come back with those two, / which he knows means, I don’t want them to see me / and I don’t want to see them right now.
It stays with him / as he returns them home, where,
hopefully, his emergency / called mother-in-law waits in their drive, and it’s there, too, / when he heads back to sit by her.
He learns it has her committed / to Ativan
when he speaks to the nurse manager, who informs him as well / that it has her so deeply she needed to be talked down / by Dr. M. who sat at the foot of her bed until she fell / asleep. It has made her a new friend who is spread out now / on the foldout he expected to splay himself on. This new friend / who checks her email and researches for a paper due tomorrow, / who smiles at the man as he checks on his wife, / who will watch her for the rest of her shift, who will demand / the bathroom door be kept open, who will remove anything / sharp the woman can use against herself.
This distance has her / bound so tightly, it is not distant but close, / so near,

so accustomed to her pain the man has no idea / if he can cross it. 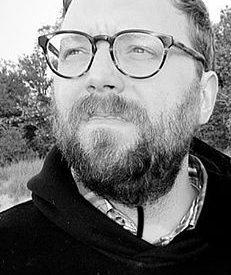 Michael Levan has work in recent or forthcoming issues of Waccamaw, Painted Bride Quarterly, Arts & Letters, Iron Horse Literary Review, Copper Nickel, and Hunger Mountain. He is an Associate Professor of English at the University of Saint Francis and edits and writes reviews for American Microreviews and Interviews. He lives in Fort Wayne, Indiana, with his wife, Molly, and children, Atticus, Dahlia, and Odette.