It is always the same time.

I wake up and stare at my crumbling dissertation; Derrida, Diderot, Dallois, The Society of the Spectacle Fella, this French one or that, belittling me, always, scathingly exhaling bullets down my neck.

My advisor is nowhere to be seen. Clarise Systemic and I had quite a valuable and intimate and motivating relationship in the years prior—perhaps a bit too intimate of a relationship—but nevertheless, she disappeared the day the college decided upon canceling in-person coursework. According to a colleague of mine, Clarise moved to some Nordic country when it all shut down and obtained a highly sought-after position as an offshore annuity fund manager with a guaranteed Annual Percentage Yield that has, in fact, raised a few eyebrows at the Federal Reserve. After speculating on it for weeks, I was finally notified of my new mentor today. John Billy Corduroy. A man with a blonde mohawk who teaches Western film theory. A pair of inert eyes that seem to have no color. No suggestion of livelihood.

I eat turkey on wheat, no fixings.

My dog uses the sliding door to use the restroom three times a day, standing out there on the lawn, observing the passerby cars and barking in unison. I sit on the balcony in my late Father’s decrepit rocking chair at 7:00 p.m. Eastern Standard Time until 8:30 Eastern Standard Time each day and count the squirrels crawling up the tree. (Today was thirteen, yesterday was eleven, the day before was fourteen, and the days before that was seven each, producing a weekly rolling average of 10.4 sq./day). So be it.

I eat turkey on wheat, no fixings. I lay in bed and think about Clarise.

The monotony, the boredom. I am a person, I once deliberated, but I now belong to a vast network of people, all of society, or whatever the world once was, or is; a consciousness of action and inaction. An interconnected salute to obligatory survival tactics, sheltered away in solitude, eating and staring off into the distance, sandwiches and dog piss, squirrels and obsolete writing projects—and we fervently believe in our case. We will get through this, they tell me. They tell me a lot of things.

There is no longer a single day. Each moment is not a binary, nor an origination, but rather a continuation of the prior.

I eat turkey on wheat. I brush my teeth with Colgate. I stare at my dissertation.

The dog is mocking me. He wakes up in the middle of the night like clockwork and bats at my stringy almond eyebrows with his claws, insisting on my lugging downstairs to fill up his bowl. Does he have no patience? He knows something has changed. Gregor Samsa.

I eat turkey on wheat.

When will I be permitted to sit in my cubicle like I always have, like I thought I always would? When will I go back to cold-calling people for a product I know they do not want and likely never will? I am lost, deserted. Who am I now? I am a parent to an ungrateful dog. I am a sandwich maker, a computer starer.

My ex-something phoned me yesterday to tell me that her mother has the disease. I told her to relax, that things of this magnitude do not happen to normal people. Her mother would be fine. She runs two miles each day, she pays her taxes, she shops at Whole Foods, she pays a psychotherapist $125 an hour to uncover her “harrowing” childhood. For God Sakes—she eats kale. How could she get the disease?

I eat turkey on wheat. I stare at my dissertation.

Sometimes before I go to bed I pray to the God I was taught to believe in as a child, half-sleeping in Hebrew school while Rabbi Cohen talked about whatever he used to talk about, and I ask God if he will spare me during this time. But why would he? What have I ever done to deserve God’s blessing of life, or continuation of it?  Is he just laughing at me, nudging the winged angels?

I boil water and drink green tea. I put three slices of turkey on wheat, no fixings.

On the television the reporters are frantic. They say we should never leave the house and that our newly elected President will do an effective job because of her experience negotiating for Siberian oil. They say we should have our doomsday bunker handy. They say God is whoever the Center for Disease Control deems fit.

My high school English teacher, a guy named Beau with a tattoo of David Foster Wallace on his left calf, posts daily videos on social media. Sometimes he does yoga and instructs everyone to do the downward dog. Sometimes he just sits there in front of the screen staring at us, or nothing at all, his eyes near black and reflective, mumbling words and phrases that come to his mind. He’ll scratch his head and moan, carving pentagrammic symbols into his hand—his eyes rolling back into his skull, eating celery. He believes in reincarnation.

I take the dog out and stare at my dissertation.  I brush my teeth with Colgate. I take tubs with cold water because the landlord refuses to subsidize my warm water in this time of crisis. “It is a luxury,” he barks at me over the landline.

When will it all end? I refuse to guess, to try and beat the system. No one beats the system. If they say to remain in the walls, this is what I will do. If they say eat shreds of moldy shit-coated lettuce to survive, I will sprint to the produce stand. I believe in all that is relayed and nothing of my own. This is my new reality.

This is the only reality. 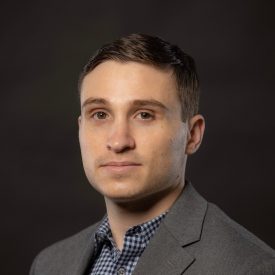 Gabe Kaminsky is a writer from Pennsylvania. His fiction has appeared in Exile, October Hill, Scarlet Leaf Review, and elsewhere. His story “Cellular Network Not Detected” won First Prize in the University of Pittsburgh’s 2020 Writers Café contest.