I know my address in case I ever get lost. My street is Lookout Mountain. You turn at Wonderland Avenue. Wonderland School is pink. They don’t wear uniforms.

There’s a shortcut to our school. You drive on the Bird Streets. We never go there. The big gate is always locked. The Bird Streets are famous. One even has a song. It’s called Bluejay Way. Daddy never taught it to me.

When I was in kindergarten, a bluejay flew into the playground and kidnapped our turtle. It was sunbathing.

We drive down the hill. The sign says “Do not cross the double yellow line.” We pass the burnt-down castle. A famous magician used to live there. He’s dead. Not from the fire. Before he was dead, people locked him in chains and packed him in a suitcase and threw him to the bottom of the ocean. He always escaped. He would have escaped the fire too. Trees grow inside the castle. The fire made the walls turn black.

On Sunset, there’s the Liquor Locker. Daddy buys cocktails there sometimes. There’s Pandora’s Box. Pandora comes from a Greek myth. She opened the box. She wasn’t supposed to. All the bad things in the world flew out.

Daddy and Mommy never drink cocktails in the daytime. Just coffee. My brother stuck his elbow in Mommy’s coffee. He had to go to the hospital. His elbow was yellow. It was just the ointment, Mommy said. Pandora’s Box is a nightclub. My brother is just a baby.

There’s Mommy Going Round and Round. I call her that because when I was little I thought she really was my mommy. She is a giant on top of a sign. She has white boots and a cowgirl hat. One leg is bent high. She twirls like a ballerina. Jeff says she has electricity. That’s why she can move.

Jeff says karate can make you so strong that anybody you touch will die. Once there was a man and lady who loved each other, but they could never touch each other because they knew karate. Kissing was okay. But no shaking hands. They loved each other so much they forgot. One day they were walking down the street and started to hold hands without thinking. Oh no! they cried. They looked at each other. They let go of their hands. It was too late. They were already dead.

If we drive over the hill, we pass Danger Street. The sign says “Danger.” We never go there.

What is the danger? I want to know.  I’m scared to ask.

This is what happened. All the water in the world disappeared. The dinosaurs got very thirsty. Mammoths and saber tooths too. They saw a black pool and tried to drink it. It was really tar. They got stuck. The more they moved the more stuck they got. People made their statues. The baby mammoth has its trunk up in the air. He cries for his mommy. She’s stuck in the tar. We went in the school bus. There’s a fence so children can’t fall in. Our bus driver smokes cigarettes. I saw him at the tar pits. But he didn’t see me.

The Most Dangerous Things

If you see a skull and crossbones, Watch Out! It means pirates or poison.

I never want to go to Texas.

Mommy doesn’t read the sign. She turns onto Danger Street. I try to stop her. She keeps driving anyway.

No! I scream. Be quiet, she yells at me. The road is twisty, she says. I have to concentrate.

I can’t stop crying. I don’t want to die.

Mommy turns around. She has her mad face. Her lips make a line. She forgets to steer. The car bumps off into the dirt.

I hide on the floor.

What’s the matter with you? Mommy smacks the steering wheel.

Maybe she brought me on Danger Street on purpose.

This is Danger Street, I try to tell her. I can’t lift my head. I talk to the floor. She wants to leave me here. She wants me to be dead.

But what if I don’t die? What if I make friends with the ghosts and tell them stories and learn what berries aren’t poison so I can eat them? What if I grow up on Danger Street and never go to school and wait for Mommy to come back another day because she misses me and is sorry she left me here alone?

I would surprise her and say, Don’t be sad. I am alive. I know how to take care of myself. I will help you take care of the baby. I will teach you everything the ghosts taught me because I’m not afraid of anything anymore.

What? Mommy still has her mad voice.

Mommy would be so happy. She would say, I’m sorry and let me live with her and Daddy and the baby forever.

I peek up at her. My breath is fast. I say it louder this time.

And Mommy laughs. Oh honey, she says. This is Mulholland. She tries to lean over the seat to hug me but I won’t get up. I still think she might throw me out the window like Hansel and Gretel.

You’re such a goose, she says. I’ll show you. She starts the car and drives me back the way we came. We’re safe again. Mommy forgot about the danger. I reminded her.

Except she steers the car off the road and parks right in front of the sign. She lifts me out of the car and makes me read.

Danger, say the big black letters. There are black pine trees on the sides of the writing like a frame.

Danger, Mommy reads to me even though I know what that word says. She puts her finger on the smaller writing. Fire Area, she says. No Smoking.

I feel stupid. Smoking is the danger. Ghosts are make-believe.

One spark from a cigarette can burn the canyon down, Mommy says. She takes me back to the car. She goes back on Danger Street. She says it’s a shortcut. Sometimes it’s the way we have to go.

When Betsy Was Our Babysitter

The sky is making noises and my baby brother is crying downstairs. Betsy made me take a nap. Mommy forgot to tell her I’m big. Betsy is visiting from Massachusetts. She’s Mommy’s cousin. Mommy says she’s distant.

We have to go, she says. She’s carrying my brother. Her cigarette hangs in her mouth. Where’s Mommy, I want to know. Hurry, she says. I try to go to the bed to get my shoes but she grabs me and pulls me downstairs and all the way outside.

I think she’s a kidnapper. Her face is mean. Mommy told me never to go anywhere with a stranger.

The whole street smells like a million cigarettes. It burns my feet. I hop so it won’t hurt so much.

Stop whining, Betsy says. My brother keeps crying but I don’t know why because he’s getting carried and I have to walk. I try to walk on tiptoes all the way. I want to know where we are going. To your neighbors, she says. It’s an emergency. I don’t believe her. I don’t know what to do. I want to run away but she’d still have my brother. And she holds my arm tight. She keeps pulling me down the hill. My feet are burning up. She throws her cigarette on the ground.

Mrs. Donen is waving to us from her mailbox. I see their car too, waiting at the end of the driveway. Mr. Donen is home from work even though it’s early. Daddy’s not home. I don’t know where Mommy is. Jeff is in the back seat.

Hurry, Betsy says. But Mrs. Donen doesn’t hurry. She bends her knees to talk to me. She holds my chin in her hand and puts her face right up to mine.

The canyon’s on fire, she says. We have to evacuate, she says. I don’t know what that means but I climb into the car next to Jeff and Betsy squishes in too. Mrs. Donen holds my brother on her lap. I won’t let Betsy hold me.

Mr. Donen drives up the hill to the Bird Streets. The gate is open.

Look at that, he says. His face is in the mirror. We turn around. The sky is orange and red and black like a sunset except it’s still the day.  It’s actually beautiful, says Mrs. Donen.

There’s Sunset, Mr. Donen says. He’s talking about the street. I look for my school. I look for the Liquor Locker. I look for Mommy Going Round and Round, and Pandora’s Box. Everything is small and far away.

There it is! Jeff points. I don’t believe him. Where are the big red letters?

Sirens sound like screaming. My brother is crying. Betsy is crying. She smells like an ashtray. Mrs. Donen reaches back and pats her knee. Mr. Donen is laughing. Welcome to California, he says.

I turn around to see the red sky. Except now it’s more black. Like night in the day. Like the inside of Pandora’s box.

Mommy told me the story. Pandora was curious. Pandora was naughty. She opened her box even when she wasn’t supposed to. All the bad and dangerous things in the world came flying out.  But Mommy said there was one thing left at the end. It was a jewel. The jewel’s name was Hope. 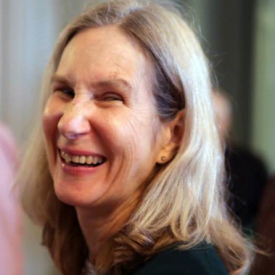 A California native living and writing in fairly happy exile in Philadelphia, Ann de Forest writes about the urban landscape for Hidden City Daily, where she is a contributing writer. Her poems, short stories, and essays have appeared in Noctua Review, Unbroken, Hotel Amerika, The Journal, PIF, and Cleaver Magazine, among others. She is currently writing a middle-grade time travel novel about the climate crisis and editing an anthology on walking, Slow Going.