I can hold it between my teeth”

My father loves that line. He repeats it to himself three times,
calls me to talk about it a week after I read him the poem.
It brings him back to the seminary in the 1950s
when he found God everywhere.
None of his five children go to church,
but I promise to engage in regular discourse.

It brings me back to St. Anthony’s on Troy Hill.
San Francisco has nothing on Pittsburgh.
Inside are the so-called teeth of saints,
pieces of the cross, even Jesus himself has been spotted
on tours, but only on weekdays.

You never think about the teeth of God,
the teeth of those you worship.
Now it’s all I see—the crooked pieces of porcelain
gleaming at me from the mouths of hungry men.
Rotting yellow maggots hanging by tendons,
and the petrified pebbles claiming
to be the teeth of someone I’ve never heard of.

My father texts me
“God is everywhere.” 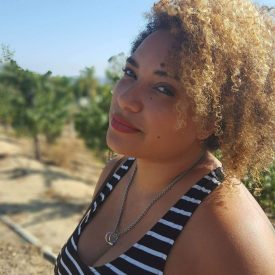 Nicole Lourette received her MFA in Creative Writing from Chatham University. Originally from Rochester, NY she now resides in Pittsburgh, PA with her two cats. She is an editor for Pittsburgh Poetry Journal with her work featured in IDK Magazine, Vagabond City, The Paragon Journal, and elsewhere.