I have three bottles of water, some canned goods, a propane stove. I have a shovel, blueprints, and a big enough backyard. I still don’t own a pistol. Because I’ve seen The Twilight Zone, I’ve several spare pairs of glasses. Because I may have to repopulate the planet, I might start looking for a mate. Maybe I’ll ask someone out on a date. How’s that for a pick-up line? Maybe not tonight. I should buy some survivalist literature. I should get a can opener, a pocketknife, another propane tank, another fedora. I could make a checklist. I shouldn’t procrastinate. Some scholars think it took Noah 120 years to construct the ark; others have recalculated, say it was half that. Tomorrow maybe I’ll buy cement blocks and concrete. The cupcakes I bought won’t last till the apocalypse, but that’s okay: I have plenty of time, and they were delicious. 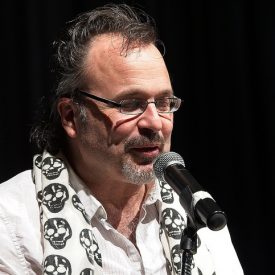 Gerry LaFemina’s numerous collections of poetry include The Parakeets of Brooklyn, Vanishing Horizon, and Little Heretic. His collection of essays on poets and prosody, Palpable Magic, came out in 2015 from Stephen F. Austin University Press and his textbook, Composing Poetry: A Guide to Writing Poems and Thinking Lyrically was recently released from Kendall Hunt. His new book of poems, The Story of Ash, is forthcoming this year. He teaches at Frostburg State University and serves as a mentor in the MFA Program at Carlow University.