He killed four hundred species of birds
so he could paint one of each, using wire
to pose the dead in flight or repose,
thoughtful and serial.

His was a study
of the beautiful flash, the elusive, staccato
chord. Not a succession of drab
sparrows but the flamingo, the osprey
and heron. An eagle slung over
the shoulder in burlap.

He predicted the spread of civilization would kill
more birds than guns ever would;

Maybe that is why I think of his palette
when earth appears in satellite image
a bright finch suspended in a sea of charcoal,
land masses dotted in helio green
and sienna, feathery clouds so finely boned
above the cobalt blue

It was just one bird, someone said of the painter. 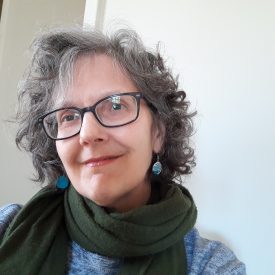 Sharon Ackerman holds an M.Ed from the University of Virginia and is poetry editor for Streetlight Magazine. Her poems have appeared in the Atlanta Review, Northern Virginia Review, Cumberland Review, and various others. She is the winner of the Hippocrates Poetry in Medicine international contest, London 2019. Her poetry collection Revised Light is available through Main Street Rag publishing company.