The wind troubled the gap between her coat top and neck. She shifted the box to her left hip, fingers white and numb from the tight hold. Using her right elbow, she knocked on the driver’s window, her hand still clutching a coffee cup from the drive. A black Audi, he had told her. Two years ago they had traded in his coupe and her stick shift for the wagon that fit them, their lives, their dog. That was all gone now, the house too. And now here he was, driving a luxury vehicle he couldn’t afford. At least it had four doors this time; at least it was his money.

He unrolled the window. A gust blasted just then, flinging her hair across her eyes, blinding her.

“Open your trunk.” Her voice startled her.

“Watch out,” he said. He opened the door and took the box filled with his things from her arms.

She uncurled her left hand, the joints stiff from the weight and the cold. An image from a folk tale arose. The one with the girl in the ocean, missing fingers. Chopped off, rather. Her severed digits became sea animals. What animals would her own fingers be? Their discarded housecat, their corgi, the children they never had? Would they romp around this parking lot next to the toll booths?

“You look frozen.” He closed the trunk and walked to the passenger’s side and opened the door. “Get in.” He ducked his head slightly and indicated the open door. It shuddered in the wind.

She thought about getting another coffee at Dunkin, across the parking lot at the highway stop she had chosen as their exchange point. How many months since she last saw him? She couldn’t drink a cup of coffee without fearing its end; how its brief joy so quickly diminished, turning cold and lifeless in the cup. Thus she often ordered two of everything, to avoid the feeling of emptiness. Of incompleteness. Two red wines. Two seltzers. Two medium coffees. Why not just get a large, or an extra-large, people would ask. It’s not the same, she’d say. It’s not the same.

She sat down in the seat. The leather was warm. A vanilla air freshener hung from the rearview mirror.

“Seat warmers.” He waggled his eyebrows at her.

She felt her nostrils flare and the memory of a grin. She reclined back. Her legs inched up and toward the dash. She had always put her feet on the dashboard during their drives. Her footprints had constantly marked the inside of his windshield.

“Not with this one.” He moved his arm toward her legs, then withdrew before touching her.

They started laughing, remembering.  The long year of silence disappearing like sugar in water. They sat that way for a while. Soon it was time for her to go home, and for him to drive west, to the base where his life was now contained.

She drove back the way she came. She sang. Her voice in the silence reminded her of those dark mornings on post, where the sound of chanted cadences reverberated in the pre-dawn. 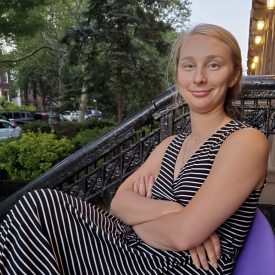 Nina Semczuk‘s writing has appeared or is forthcoming in Sledgehammer Lit, The Line Literary Review, Rougarou: Journal of Arts & Literature, The War Horse, MONEY, Tasting Table, and elsewhere. A recent story of hers was nominated for the Best of the Net Anthology and she has received grants from the NEA and Poets & Writers. Before moving to Brooklyn, she served in the army for five years.