The following is a brief excerpt from the author’s forthcoming novel, Arribada

So you’re back, they surely said. As if she had been gone for the weekend.

It was hot when Mariana returned. She stood at the Ayotlan airport surrounded by the kiddy guitars; the paper flowers in Mexican pink; the coconut and tamarind candies for tourists to take in the aromas of this far-off land. One o’clock in the afternoon, and in the waiting room stood the sleepwalking workers with no lunch break but yes, a promise of better pay next year. Their gray necks glistened; their shirts stuck to their backs like the drenched sails of a sinking boat. A bit uppity, a bit shy, they smiled at Mariana and she smiled back, airing herself with her lace fan.

It was all so familiar.

But not everything was the same. Remember the day she left.

Then the airport had been a market sweltering with laughter and the last-minute recommendations of relatives wishing Mariana a safe trip. Everyone had been there: the vociferous neighbors, the Rotary Club dignitaries. Alonso, the young uncle, really a brother: guitar case in hand, absent-minded smile, his quiet hugs for Marianita. Little sister Luisa. And Doña Clavel, standing stiff and tall, as if someone had taped a sword along her spine. Mother to the most admired girl in Ayotlan, commanding attention as she slapped herself on the hip. Her proud, cobble-stoned voice: Mariana, high school in New York, the Rotary scholarship.

That was the first of many goodbyes. Then Mariana found a way to extend her studies and came back only for vacation, to leave us again heartbroken. Pianist, collecting so many feathers on her cap she might turn into an ostrich. And the dazzled family, the acquaintances and neighbors again congregated to wish Mariana happiness: write soon, child, study, eat. Pórtate bien.

Places preserve odors and echoes over the years. This decrepit lobby, drenched in the fragrance of coffee and pineapple juice, more a market than an airport, the hallways resonating like a tuning fork with the sounds of the runaway city—Mexicana de Aviación, announcing flight five fifty-eight—The laughter and the merriment that accompanied Mariana on her many departures. Where did it all go?

How pretty, how alone, standing in that lobby with her black trousers and silk blouse, her lion’s mane. A few droplets on the bridge of her nose, a bit of red on her cheeks. She was an Ayotlan girl, would not complain, though the shock was mighty. Mariana and her high heeled sandals, her freckled feet.

A carcajada boomed from the artesanías stand, where Fernanda sat on the counter framed by a garish wreath like a pagan Madonna. Her splayed thighs pushed aside the many-colored boxes and jars and pots and trinkets. Her ruffled skirt barely covered what it was meant to cover.

She jumped off and rushed to hold Mariana. Ay chiquita, I heard—tu tío Alonso. Qué tragedia. She stroked Mariana’s cheek.

Thanks, Fernanda. So glad to see you.

The embroidery on Fernanda’s frock brushed through Mariana’s blouse. Fernanda was black coffee all over: her almond eyes, her cheeks, her chest. Coffee crowned by a torrent of black hair. She smelled of sage.

Are you doing crafts? What happened to the PhD?

She glanced at Mariana’s lips.

What’s the shortest way to the parking lot?

Fernanda pointed. She said Saludos a Luisa and the mothers.

Such a good friend. Mariana was lucky to have some left.

She walked, then waited.

In picking her up, Luisa and Madre stopped for an instant, drawing a triangle: In the center, Mariana shepherded her little suitcases. On the right, Doña Clavel sat in the taxi outside. And on the left Luisa stalked Mariana from behind a column. Then she reached her in a few strides. They held each other: chins resting on shoulders, eyes closed. Luisa leaned over to help with the bundles.

That’s all you brought? So let’s go home. Quick quick, or you’ll melt on me.

Poor Mariana was back to stay at her mother’s house. Her uncle Alonso—more than an uncle—her anchor, her brother. The boy who taught her music and to give her heart. Disappeared, Luisa had phoned. His tracks were lost in the sands. Mariana must find him. Share his story with the town. Alonso, his music flowing into her ears. Hers and no one else’s.

No more. Not now.

We’ll find him, Luisa said. And if not, he’ll rest, and we will too.

Outside, Luisa waved at an elderly lady bobbing her head inside a taxi. Their mother. Where was the black chignon, the arrogant eyes?

Luisa glanced at Mariana. That is right, Madre. Mariana is finally here.

It was good to be back. Mariana was coming to help Doña Clavel recover. It would do them good to be together again. Luisa had kept their mother company for years, and lately with help from no one but Amalia. Doña Clavel would enjoy her older daughter.

She was barely a woman when she left. She couldn’t stand this backward town, they said. Rotary scholarship for a year of high school, then the conservatory; the competitions. Freelance accompanist. Agile, enterprising, fearless girl-woman, little breasts free of the tyranny of any bra, freckled-face Muñeca. Every so often a newspaper clipping would spill out from an envelope and do the rounds of family and friends. Descriptions of a full-house concert would evoke a child’s recital dazzling the cream of Ayotlan Country Club. Her wild, blond hair forced into a mass of tube-like locks, the organza dress, the blue sash, the Clementi sonatina, the twelve years. But with the recent pictures one had to free her curls, adjust the size of her chest, modernize her attire. Hear the Schumann in her. And it hurt.

The taxi drove down Mariana’s favorite road, retracing her steps from the day of her first goodbyes. The twelve-mile malecón with the tiled sidewalk beginning at Punta Farayón and ending at Cerro de la Nevería: black cliffs and jungles, beaches blushing in the sunset, all of us skipping a heartbeat with each acrobatic diver’s leap—it was the slowest road in Ayotlan, and Mariana would not take any other. The site of the Belmar Hotel where the Belle Jeunesse of the great-aunts and – uncles had danced Saturday and Sunday afternoons. Back then aunt Laura, whom nobody knew but everyone knew of, wore the heaviest sequin dress in Ayotlan. Laura, whose coronation as queen of the Carnival ended with a firecracker turning her into a human torch.

Despite the traffic, the driver honored Mariana’s request and drove past the Devil’s Cave to the beach where she, Alonso and Luisa had camped. Careyes, that beach inhabited by friendly crabs where high tide waves would rise like towers, then fall inoffensively at the feet of toddlers and tipsy adolescents.

Mariana peered, breathing in the iodine air, but the places were not familiar. Where was the Belmar, and Careyes beach? There were no dunes; nothing but waves licking at the Malecón wall. She must be mistaken; in her distraction she surely missed it. It hid behind her tears, her sister’s words, her mother’s babbling.

That seaside road saw Mariana and Alonso grow into themselves. At his four years and her zero he sang to her, and she learned music before words. This language grew to keep others out. During Easter preparations the family would feed the tamales assembly line at the brown-paper covered table. Amalia kneaded the corn meal; Doña Clavel spooned out the chicken stuffing; Luisa the pork; one guest or another, the olives. But not Mariana or Alonso: We need more tomatoes, Mariana would sing. Hours later they would return, sunburned and sandy, with a sack of sea shells in one hand and a few tomatoes in the other. We’re back! they would sing. And so it went.

The two walked Careyes beach singing tales of sea turtles and hermit crabs. As they grew the guitar and the piano rounded out songs everyone memorized.

Now, here rode three silent women and a taxi driver pestered by a loudspeaker truck, a rolling advertisement for habanero paste or election candidates or the day’s news. Illicit lovers, hollered the loudspeaker. Stabbed to death when surprised by her husband, who was his brother. ¡Andale! Buy the evening edition of El Heraldo del Pacífico. Why advertise other people’s tragedies as a public spectacle?

Who would tell Alonso’s story? And how?

The women rode toward the stone fortress that was their house. In past years the family had dwindled. Tía Laura, abuelos, padre: all gone.

And Alonso, who liked to accompany their evenings with bossa nova and childish jokes. He left work one night and took the malecón, never to be seen again. As if the waves had swallowed him whole.

Mariana was about to plunge into a silent house with a sister and two mothers. Twenty-two, her womb as barren as the house: since she sent Osvaldo away no one had heard of another man. But she was young. She would soon smile, and someone would take her out of here. Blue eyes, translucent skin—no need to supplicate to San Antonio.

Luisa was another story: dark, feíta. Dry like a brick. She would rather draw or paint than go out. Madre complained of her paints and solvents in the courtyard. Under the unkempt fronds of the limonaria tree sprung paintings of jungles and hallucinated animals; tapestries with yarn bulges in insane purples and reds. At night the fruit bats took over the courtyard corridors, mesmerized by the limonaria scent. Madre and Luisa argued over it all. In the heat of the battle Madre would threaten the limonaria: useless tree; all flowers, no fruit. Get rid of it. And go out, child; life is passing you by.

Now with the stroke Madre seemed to have pardoned her. She nodded and smiled: you keep the tree, and I keep you.

They got home, and eyed the clock. Night should fall soon enough—what are the tropics made for?

They had supper and small talk. The sisters propped Doña Clavel on her pillows and climbed the stone staircase. Mariana took her sandals off to receive the consolation of the polished rock in the torrid night.

Luisa asked what else she needed.

Mariana brushed her hair while Luisa poured flowers and herbs in the ancient tub. Dark clothes fell on white tiles, liberating two slender bodies. The ample bathtub received them as it had with scores of others: so many women had scrubbed their husbands’ backs. So many children had enjoyed the caress of bubbles and sea sponges. The sisters stayed for a long time submerged in the aroma of limonaria, rose and lavender. Their tresses floated and tangled—blond; black.

They toweled off and Luisa started off to her room. But Mariana Come over here, Luisín. There’s room for both in this bed.

They lay on their backs, legs folded, knees parted to catch the air. They held hands as when they were little. 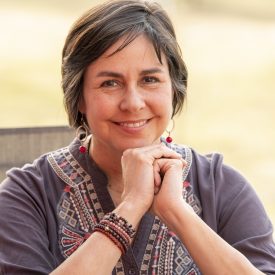 Estela González’s novel Arribada, slated to appear in April 2022 with Cynren Press, was a finalist for Feminist Press’s Louise Meriwether award in 2019. Estela writes in English and Spanish about the liminal lives of LGBT individuals, sea turtles, monarch butterflies, and those whose cultures are seen as less. Her work appears in magazines and anthologies such as Barcelona Review, La Colmena, Cobalt, Cronopio, Feminine Rising, Flash Frontier, Flyway, Label me Latina, Letralia, Luvina, Resonancias, Revista de Literatura Mexicana Contemporánea, Sinister Wisdom, Solstice, and Under the Volcano.

Estela divides her time between Ajijic, Mexico, and Vermont, where she teaches Latin American literature and culture. She is now finishing a collection of stories titled The Age of Aquarius.