at those big fellows in the Baltimore biker bar when Barbara

at the same time so she could love me both ways, which is about

profound, for who among us has not still within him or her that little

boy or girl of his or her youth as well as the lover, the soldier,

Not yet, though. Also, crazy shit can happen at any moment:

It’s 1957, and Little Richard is on tour in Australia, and he looks up

to see fire streaming across the skies, and he announces that it’s

that he’s giving up rock ‘n’ roll forever, and when one of the musicians

says no, it’s actually the Sputnik satellite burning up as it re-enters

the earth’s atmosphere, Little Richard says what if it’s an extinct

Russian satellite and a sign from God? When I was a young man,

we fellows would drive over the Mississippi to the Honeydripper

by their boyfriends. Either was fine. Either we’d take Sylvie

or we’d got into a punchup with Armand and Thibaud or both:

the idea was to do the one and narrowly escape the other, to spin out

as they hurled beer cans and cursed us in words we didn’t understand.

we’d end up at one fraternity house or another, and if it were early

enough, there might be a party to make up for the fun we’d missed

or add to that we’d had, as on the night when Esquerita

and the Eskerettes were at the Lambda Chi house churning out

grindhouse rousers like “Reelin’ and Rockin’” and “My Ding-a-Ling”

when suddenly Esquerita scans the audience, pops his wrist

in my direction and, looking a lot more like a gay black Uncle Sam

than the God in Michelangelo’s Sistine Chapel fresco,

says, I want you! as he waves me toward the stage, and while

on any other night I would have been up there, at the time I was

dating a girl I wanted to impress, and even though we split up

not long after, scandal-averse me backpedaled to a safe spot at

took my place, pride and shame whipping across his face as Esquerita

popped the buttons on this bravo’s Oxford shirt, lowered his khakis,

and left him on the dance floor in a pair of plaid boxers, slump-shouldered

and abashed, as the other brothers expressed silent thanks that they

were not him, even as they wished they were. I wonder where Dave

Robinette is now. He was even more of a nerd than I was, married

with two kids, and the least talkative person I knew. I was in graduate

school by then, and the bikers made fun of us because we were skinny

and bookish, and it was clear that asses were about to be whipped

in this bar as well, and not those of the other patrons, either, which is

another, deliberately missing them by a foot or so but just enough

to make Tiny and Scorch or whatever their names were say, Aw, you guys

are crazy! and clear out, leaving me open-mouthed and Dave with just

the slightest smile because he’d done something brave and stupid

that was totally out of character but that saved us both from beatings.

In that moment, Dave was two Daves at one and the same time,

and everything was happening at once for both of them, and he was happy. 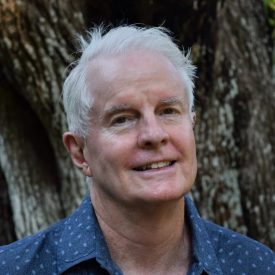 David Kirby’s collection The House on Boulevard St.: New and Selected Poems was a finalist for the National Book Award in 2007. Kirby is the author of Little Richard: The Birth of Rock ‘n’ Roll, which the Times Literary Supplement of London called “a hymn of praise to the emancipatory power of nonsense.” His latest poetry collection is More Than This.