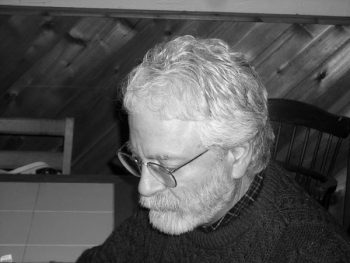 Robert Gibb (b. 1946) was born to a family of steelworkers in Homestead, Pennsylvania, a mill town six miles south of downtown Pittsburgh along the Monongahela River. The town was home to Andrew Carnegie’s famous Homestead Steel Works and site of the infamous Homestead Strike. Gibb earned a Bachelor of Fine Arts at Kutztown University in 1971, a Master of Fine Arts at the University of Massachusetts Amherst in 1974, and his Master of Arts and PhD at Lehigh University in 1976 and 1986 respectively. Gibb won the 1997 National Poetry Series Open Competition for The Origins of Evening. It, along with his next two books, comprise what Gibb calls The Homestead Trilogy, a nearly 100-poem cycle probing the fading industrial history and culture of America’s Steel City. Gibb’s other books include Sheet Music and What the Heart Can Bear, both published by Autumn House Press. For an extended appreciation of Gibb’s poetry, please click here.

Simms: Robert, you were born and grew up in Homestead, Pennsylvania six miles from Pittsburgh, and you’ve spent most of your life there. How has Homestead shaped your work as a poet?

Gibb: The depth psychologist James Hillman says “the soul is moved most profoundly by images that are disfigured, unnatural, and in pain.”  The first fact of the Homestead in which I grew up was the steel mills. Their scale and elemental presence, the way they burned at night like the underworld. The second fact was familial—my grandfather’s death in the mills and my own initiation into them. So, Homestead is legacy and the poems (in which it’s the actual subject) a coming to terms with that legacy. A lost world, as is that whole historical era which began with the Industrial Revolution. The poems bear witness to all that. Then there’s the fact that there were still pockets of woods around when I was growing up, in which my imaginative life came alive. My poems concerning the natural world go back to then. It may be that my poetry’s insistence on concrete details, on the reality of the external, physical world, is tied up with these settings, both of which engulfed me, both of which demanded attention.

Simms: You’ve said in the past that you think of the poem as “something tangible, something that’s made” rather than something that’s received as a gift from the muse or nature or the duende or whatever. I’m wondering whether the fact that your first attempts at art were in drawing and painting influenced you to think of poetry as something created on the page rather than being an artifact of breath and thought. So, if you don’t mind, let’s explore this area. What’s the relationship between your visual art and your poetry?

Gibb: Paper, brushes, colors squeezed from tubes onto a palette . . . Having started out as a painter I’ve never lost the sense that I’m working on something that has a tangible existence, separate from my own, and that what matters most isn’t content but the expression of it. John Haines, who studied art, also writes of this way of seeing the poem “as an actual figure defined in space and time.” The painting, for me, was where some aspect of objective reality was imbued with the internal one it invoked (“things he had felt,” in Rilke’s wonderful phrase).  That’s carried over in my sense of the flesh-made word and of language as a medium I work with, shaping the utterance. Words as things (typed, actual, taking up space) with their sounds and energies and kinship groups.

Simms: Please tell us about your writing habits. Do you have a schedule? Does a certain part of the day, week, or year yield better results for you? Do you have rituals that are important for your writing? In order to write do you need a certain pen, a certain chair, or a certain window? Do you always write with a pen? At what point do you move to a keyboard?

Gibb: Quiet’s a necessity and the lack of distractions. I’m at my desk every morning till at least noon, writing and revising, working on submissions, assembling (potential) manuscripts for books. I have an office I work in, windows through which I watch birds at the feeder in the silk tree (hummingbirds in the maple in summer). I write directly on a keyboard. I seem to need the clarity of the typed word—it gives me a fixed presence to respond to. I also find the computer’s a big help, revising as much as I do, in allowing me to move words and phrases around, adding and subtracting, taking my cue from the work as it emerges.

Simms: Can you tell us what you are working on now?

Gibb: I’m currently working on a chapbook of poems set in rural Pennsylvania circa 1969-1985, and more recent ones set in New Homestead, with its woods and creatures, where I live now. Living as we do at a time of great ecological havoc—the Anthropocene—nature seems especially compelling to me. The need to come “home to the mother,” as Jeffers says.

Simms: Is a poetry community important to you? If so, have you found that in Pittsburgh?

Gibb: Community’s always a plus, though the work is done in solitude and read in silence. I’ve a couple younger poets I get together with over beers from time to time (and a bartender friend who reads my books). As for what used to be called the “po-biz” world, I remain on the margins. Our ultimate allegiance is to the poem, I seem to recall Roethke admonishing us.

Simms: Who were your poetry mentors and how did they influence you?

Gibb: Since I majored in painting (BFA, MFA) and not creative writing I’ve not really been mentored. I knew the poet Harry Humes who helped me getting started, putting me onto Stevens and Frost, but other than that, for good or ill, I’ve been winging it on my own. My great teachers were at Lehigh University (MA and PhD) where I engaged with books on a level I’d never experienced before. Influences came through my reading, both poetry and prose.

Simms: Do you enjoy giving poetry readings?  Why or why not?

Simms: Tell us about recent books you’ve read that stood out to you.

Gibb: I’m reading the English poet R.F. Langley’s Complete Poems and Pound’s Posthumous Cantos, both of which are filled with what Hugh Kenner calls “radiant gists.” And revisiting Donald Justice’s meticulous poems. How well he evokes milieu, the tang of things. The exact, not the proximate, is present in all three, which to me is a kind of morality.

Simms: Please tell us about the making of this poem.

i.
Birds in a murmuration,
Fluid parts of the pattern
Turning on a mid-air dime.

ii.
Bodies all of one mind
Seized by the same idea.

iii.
Pointillism, not pantomime,
The wingbeats raucous
With their own applause.

iv.
Think of the tolerances
Involved so the starlings
Can balk and skew without
So much as touching.

v.
Think of being plural,
Tessellations of the weft.

vii.
A leaf storm of coordinates.
Its flocking sovereigns
Autonomous
As the Paris Commune’s.

ix.
Gathering densities
In suspension in the lattice
Of that great shattering.

Gibb: The seed crystal for “Starlings” was the word murmuration, which I came upon in the caption below a photo of the birds in one of those clouds of iron-filings above an autumn field. That happens sometimes—the frisson coming off a word. And then I’ve always been enchanted by the phenomenon itself, as if it were some sort of hologram or field of being. Once I had the first three lines I sensed they comprised a section and, the poem having announced itself as a sequence, I proceeded from there. About this time Stevens’ blackbird came to mind as a model (acknowledged by the word pantomime in the third section). Then it was a matter of generating a sufficient number of additional takes that were each solid enough, taking care to avoid repetitions. Once I had the aspects, I changed their sequence a number of times until the whole seemed to click into shape.

Simms: Are there key events or places that you keep coming back to in your poetry?

Gibb: Yeats says somewhere that repetition is failure. A strict yardstick, and one I’ve tried to apply to my own work, meaning even key events get a one-off treatment (unless I can find different facets of them to explore). Themes, though, are a different matter. As is place, which is canvas and context and subject as well, having divided my life as I have almost equally between Homestead and rural Pennsylvania (Dutch country). Homestead’s been my Paterson and Catalonia and Macchu Picchu, where I’ve rhymed personal history with that of the town. Berks County’s where I lived with the rhythms and presences of the natural world, insinuating myself among them. Together they’ve formed my in-scape as well as given me the images in which it takes shape. 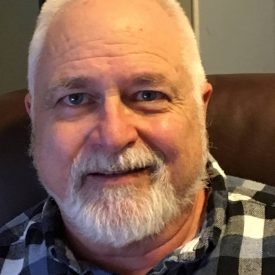 Born and raised in Texas, Michael Simms has been active in politics and poetry for over 40 years as a writer, teacher, editor, and community activist. He is the founder of Vox Populi, an online forum for poetry, politics and nature, as well as Autumn House Press, a nonprofit publisher of books of poetry, fiction, and nonfiction. He’s also the author of four collections of poetry and a college textbook about poetry—and the lead editor of over 100 published books. Simms has won a number of awards and fellowships, including a Certificate of Recognition in 2011 from the Pennsylvania State Legislature for his contribution to the arts. Simms has an MFA from the University of Iowa and a Certificate in Plant-based Nutrition from Cornell University. He lives with his wife Eva in the historic Mount Washington neighborhood overlooking the city of Pittsburgh.