Grannie wanted to be laid to rest in Scotland. Her children, for whom she’d saved every last penny to provide and protect, found a beach an hour south from where she died. Her eternal resting place was a toothed jetty in San Mateo County that “looked Scottish.” My dad, the second eldest among two brothers and two sisters, selected the beach. He was the authority on Scotland’s scenery, since he was born in Paisley and spent the first seven summers of his life in his mother’s childhood home. Today, he represented his Scottish colors in a burgundy dress shirt and a motley plaid tie.

“Mom hated Scotland,” he told me. “She never spoke a kind word about it.”

His siblings agreed. She also hated Catholics, liquor, and her sister, Eleanor, who was presumed to be buried in Scotland until a month ago, after checking into a hospital in Palo Alto and identifying Uncle Harrison as her emergency contact.

“I’m putting Mom down here,” Aunt Kimberly announced. She shimmied a cedar box between two rocks and put her hands on her hips, squinting sideways. “Does she look crooked to you?” The box was wrapped in a striped tartan that might’ve belonged to our ancestral clan. My aunt couldn’t find a registered tartan for Darroch, Grannie’s maiden name, so we borrowed the colors from Clan MacDonald of Sleat. She removed the lid to reveal a dusty plastic bag. “How do you suppose,” Kimberly rubbed the bridge of her nose. “How do you suppose we dump her?”

I stood with my older sister, Jess, and my twin, Meg, exchanging blank expressions.

“Are there instructions?” Jess asked.

“All at once,” Meg said and her hands mimicked a chucking motion, as though we’d spray Grannie’s ashes like a bucket of paint. Kimberly lifted the bag, which looked like a vacuum filter full of lint, and searched the box.

“Aren’t we supposed to keep some?” She asked, feeling the walls of the box with her hands. Eventually, she plopped the bag back into place. “Yes, we’ll keep some.” Her hands returned to her hips and she breathed in some sea air. “Good. This is good. This whole area, especially over there,” she nodded to the charred cliff, “Reminds me of Scotland.”

I glanced around the beach, which was more of a glorified tide pool knitted together by red clay and the highway ice plant. We stood there, pinching each other’s elbows, trying to come up with something nice to say.

“Her ashes will probably make it to Scotland.”

Kimberly nodded, sucking her teeth: “That’d be the Atlantic.” Then she clapped her hands together, pivoting away from shore. “I’ll get the family—watch your Grannie for me.”

Meg stared at the box with her hands outstretched. It had taken a great deal of planning to get this side of the family all together for today, even though everyone lived within a forty-mile radius to each other. Allowing Grannie to tip over and end her own memorial before it could begin was not an option.

I leaned against the rock and unfolded a piece of paper that was moist with sweat or seawater and worn by the inside of my pockets. The lyrics to “Loch Lomond” had survived the ride to Pescadero. My sisters and I had practiced the Celtic Women version, an ambitious choice that we all now regretted.

The family trickled down the hill—Uncle Ian, a gold-haired abalone fisher/chiropractor, Aunt Suzanne, and my parents. My mom and her weak knee stood at the top of the hill, using my dad’s shoulder as a guide. She and Dad navigated the pivots and slanted clay until they were about half-way down the hill when Aunt Suzanne broke through the crowd like a racehorse out of its gate. She sprinted past my parents, breaking Dad’s grip, nearly sending Mom face-first onto the sand, and landed at the bottom.

She whooped. “Nearly lost control there!”

Kimberly breathed in deeply through her nose. “OK. We’re meeting at the tide pools in five minutes.”

Grannie’s beach was a ten-minute drive from Kimberly’s house in Pescadero. After the memorial, we would gather in her living room, among platters of raisin crackers and goat cheese and soft-boiled crab, and stare at the pink pasted posters of Grannie in her nursing uniform. We would ignore the plastic Christmas tree, silent in the corner, until the appropriate time came for White Elephant.

We have history here.

Twelve years ago, we congregated outside the church for Kimberly’s wedding and collectively ignored the existence of the cemetery, which expanded from the backyard and cut into the green countryside. Where, aged six and eight, my sisters and I tugged at our dresses and argued over who should be crowned the flower girl.

“Well, my middle name’s Rose,” Jess said. Her voice dragged out the last word with an air of authority, as if to say—I was born for this.

While we were distracted, Grannie crept into the outhouse to escape the noise. Alzheimer’s had begun to tangle the roots in her mind—still undiagnosed, but persistent.

Only moments later, the door burst open and Grannie followed. Her hands gripped the sides of the door while her dress flapped above her hip, baring her naked ass. We watched, our mouths agape, as she dragged herself back into the outhouse. The plastic latch slapped shut and all was still. We knew we’d witnessed something forbidden and come out the other side. Each of us hiked our dresses to our thighs, using our small cruel fists to sashay the wreathed fabric through the air. While I can no longer remember, a deep shame suggests that she had sewn those dresses by hand.

Once the family had gathered at the beach, we all took stock of the tide, which rushed furiously past us, spitting foam.

My uncle handed Papa a long wooden spoon for the ashes and together, they wobbled to the edge of the rock. Papa’s hand shook as he dug into the bag. The sound the spoon made against the ash was like the thin side of a penny scraping a lottery ticket. He resembled a schoolboy in his olive-green suspenders, crouched beside a sand castle, tunneling a moat with his spoon.

“There is a tide in the affairs of men, which, taken at the flood, leads on to fortune…,” Papa began, and his voice slipped beneath the wind. He’d gleaned the line from a dialogue between Brutus and Cassius in Shakespeare’s Julius Caesar. He was fond of memorizing lines and changing them slightly or otherwise reproducing the punchline of other people’s jokes to get a laugh. The original line should end with the word “ventures”—as in, a risky undertaking— but he would replace it with a rhyme instead. Papa’s second favorite line to quote was from a 1916 comic by Jay Darling: “It wasn’t the cough that carried him off, but the coffin they carried him off in.”

Perhaps recognizing that now was not the time, he fell silent. His spoonful of ash fell on the rock beds and dirtied the tide pools, making the stinging petals of an anemone snap shut prematurely. It seemed that Grannie’s sheer mulish will to survive had endured cremation and refused to mix with the seawater.

After the urn was half-empty, the family collected in the corner of the beach and Uncle Harrison played “Amazing Grace” on a set of bagpipes. The instrument looked like a discolored carcass broken open by its own stubborn bones. He began to breathe into the mouthpiece and pumped the bag, ushering out a terrible screech. Some notes resembled the song, but it was mainly one long scream. Still, we felt that music should be played at a funeral and terrible or not, bagpipes filled the requirement. The whole procession was just beginning to feel functional when Aunt Suzanne, having noticed the tongue of a dorsal fin, gathered all the noise she’d been suppressing into a scream that managed to drown out even the bagpipes.

“Look! Look at the whales!” She wanted the world aware of her serendipitous moment with Grannie.

“Shut up!” Kimberly shouted. “Mom didn’t give a shit about whales.”

Harrison stopped breathing into the poor instrument and let it die, a skinned cat in his arms.

“It’s okay,” he tried to interrupt. “I don’t remember the rest of the song.”

“Can’t you play anything else?”

“Silver bells?” my uncle offered. “It is Christmas after all.” He looked at his hands, seeming to realize his mistake, “Or maybe something Scottish.”

My dad closed the lid to Grannie’s urn and hugged it to his chest.

“Do you have anything you’d like to say to Mom?” He asked Papa. “Any parting words?”

“Oh, yes, good idea,” Kimberly said. “We should all share stories of who she was.”

I looked between my aunts and uncles, wondering what they had inherited from Grannie. Her soft, weathered face peeked out from beneath their California tans. Everything else is lost—her Gaelic tongue, her stories, even the sound of her voice, washed from the memory beds. Her children never truly understood her—what it must have felt like to grow up in the most deprived city in Scotland, work in a textile factory until age 17, and then, to leave for America and never return home.

Papa tapped the spoon against the palm of his hand, whistling softly. “There is a tide in the affairs of men, which, taken at the flood, leads on to fortune….”

“Anything about Grannie?” Kimberly broke in, desperate. “Can we remember something?”

Papa rolled onto the balls of his feet, almost singing. His smile revealed a line of rotten teeth. “On such a full sea are we now afloat. And we must take the current when it serves or lose our dentures.” 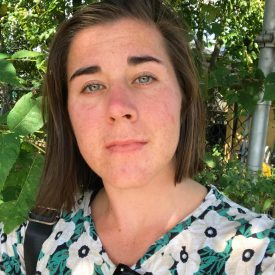 Sam Smith received her MFA from Chatham University, where she earned Best Thesis for her manuscript Tomboy in Red Lipstick. She is currently program director of Rainbow Writers and co-founder of the Queers Write Pittsburgh workshop series. Her work can be found in Crab Fat Magazine. Please visit her at samannesmith.squarespace.com.