All night, each night, the wind
as against the hull of some dropped

ship in a dried up sea
the rain seems to wish to fill.

my daughter says after quieting
from her rage over the speed

of her sister up the stairs.
Nothing can sharpen the world,

but our dullish eyes can see sky
in a window, not because night

of rain, but the seeming order it made,
which isn’t organized, really;

the drops are dropping, or drying
the moment they land,

long enough to see the results of.
Everything counts. The wind

smells of molding maple leaves,
seems to come from every direction at once. 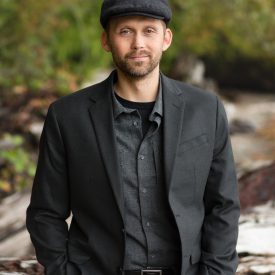 Jeremy Voigt’s poems have appeared in Gulf Coast, Post Road, Willow Springs, Fifth Wednesday Journal, BPJ, and other magazines. His chapbook, Neither Rising nor Falling, was featured on The Writer’s Almanac. He was nominated for a Pushcart Prize, and his manuscript, Estuary, has been a semi-finalist for the Dorset Prize, The Crab Orchard first book prize, and the Miller Williams prize. He lives, writes, reads, parents, runs, and lives by a large lake in western Washington.