July Westhale’s ability to craft poems that engage complex emotions without demanding that the reader take a particular stand is on full display in Via Negativa. It is a collection that rewards deep engagement and repeated reading. In contrast to Westhale’s earlier book, Trailer Trash (Kore Press), which was a triumph of terroir and rooted in the California landscape where the poet was raised, Via Negativa shifts perspective from the exterior to the interior world, generating work from the poet’s accrued experiences. Landmarks still appear, but with the decontextualized and disorienting familiarity of a dream-recollection. Westhale’s readers gain access to this interior world via the kaleidoscopic lenses of physical and emotional imagery and incredibly playful referentiality, as in the collection’s opening poem, “Via Negativa” — one of several poems with that title:

I’m close, closer than all the angels
in all the worlds and all the heavens, too. I am
as close as Uriel, Gabriel, Muriel
Rukeyser. As close as the rock is to un-
rocking itself.

Here the poet reveals their roots by invoking Uriel and Gabriel; both are among the angels named in H.D.’s 1945 book Tribute to the Angels, another work that examines the intersection of the physical and metaphysical experiences of existence, as in the poem below:

Annael—this was another voice,
hardly a voice, a breath, a whisper,

as when in Venice, one of the campanili
speaks and another answers,

from the bell-towers, lilies plundered
with the weight of massive bees . . .

And what of Muriel Rukeyser’s elevation to the same station as the aforementioned angels?

I suggest that is a recognition of the power of that poet’s influence on Westhale. After all, Rukeyser, too, wrote from the inescapability of her own incarnation; in particular I see Rukeyser’s “The Speed of Darkness” as being a poem with which the poems of Via Negativa are engaged in conversation:

(Rukeyser, [X], from The Speed of Darkness)

Like Rukeyser, Westhale’s poems afford the reader a vulnerability that never feels performative; this is not the deliberate opening of a single door to allow a glimpse of interiority, but rather Westhale actively working to document what their interior world is like so as to erase the distinction between that world and the reader’s understanding. And like Rukeyser, Westhale’s interior world is “thinking and reaching” to make connections and reveal itself.

So it’s a canny move to open Via Negativa with “Via Negativa”; the poem is offered as an ars poetica in its first line, and in it Westhale develops the themes they engage in the rest of the collection: the presence of the Divine (and divine intermediaries), the poet’s inescapable incarnated being, and Westhale’s interest in how language serves as its own intermediary between the emotional/intellectual and physical aspects of the self.

By way of example of this last point, I found the poem “[If I Get Caught Taking Mood Stabilizers],” to be a masterful run of linguistic digressions that hint at paranoia (“they might think they’ve won”) and disordered thinking yet never slip into parody or glorification of the condition at hand. The linguist Elaine Chaika’s research into schizophrenic speech patterns illuminated the manner in which discourse may be interrupted (or “broken”) by seeming non-sequiturs, often (though not exclusively) linked to previous utterances by sonic affiliations, as seen in this example quoted from a person with schizophrenia in Chaika’s text Language: The Social Mirror, “I have distemper just like cats do, ‘cause that’s what we are, felines. Siamese cat balls. They stand out. I had a cat, a manx still around somewhere. You’ll know him when you see him. His name is GI Joe. He’s black and white. I had a goldfish, too, like a clown. Happy Hallowe’en down.”

Looking at Westhale’s poem we’re listening to a speaker who acknowledges that they’re “not/trying to be insolent, or strange//in speech” — in other words, who demonstrates an awareness of the possibility of broken discourse and the subsequent difficulty of communication — but who then leaps from not knowing “what it is to be a cask, or a rind,” itself an example of digression through association, casks and rinds both being outer coverings that hold or protect internal contents with few other overt similarities — to the following series of associative jumps:

I eat peel with the best of them.
I enjoy the bitter, I have a profound

experience of bitterness. The world
is a rock of a place—it jetties.

It cuts soft skin. It is made
of stubbornness, but stone is a slow burn.

Not unlike the person with schizophrenia quoted by Chaika, the speaker in Westhale’s poem seemingly cannot avoid making these associations, which continue through the rest of the poem but never fully divert the poem from its trajectory towards “the thing that is like chalk in my mouth,” nor from the ambiguity of the ending, which describes the speaker’s years of experience on the mood stabilizers with a series of images (“Dimmed lights, low//volume, long drives, standing ovations.”) that are impressionistic, but also lack indication of the speaker’s feelings about them.

The poems in the book are not all solely mental, however; as I noted above, a great many of them deal with the linkage of the mental and physical aspects of self-as-female. In several poems we are allowed to be present while the speaker works through yearning for a baby and reflects on the connective power of sex. Of the four poems in the collection called “Via Negativa,” the fourth is perhaps the strongest; in this poem, Westhale interrogates the Judeo-Christian imagery of Eve’s breaking of the Edenic promise and the subsequent Christian understanding of Jesus, all while never losing track of the speaker’s experience in their own body:

My tongue is not the tongue of an angel, as in my dreams.
Only my uterus is being born again on the settee, tacked

with upholstery by the carpenter, the very man who wall-
papered the stanza, built the confessional, covered the legs

of the indecent pews. Why else would Jesus have such a modest
profession, why else would my body take
this opportunity to open
her zaftig ruby mouth
for carcass after carcass?

Truly, Westhale displays a remarkable ability to take imagery that has dominated art in the so-called Western World for millennia and reinvent it using the lens of the self, and, in doing so, center a female experience in the notion of death and rebirth central to so much Christian imagery. This is a remarkable achievement — and a poem worthy of repeated close readings.

Westhale’s prowess as a poet is not only in the reconsideration of central tales of Western culture, however, and I do not want to downplay the emotional range contained in these poems by only focusing on those dealing with mental health, yearning, and the excavation of the self. This collection is also by turns joyous, sensuous, and just as clever in looking at the quotidian as at the monumental. One of my favorite poems in the collection, “The Laughter Age,” imagines the future of our society in the context of the broad view of history, naming our time “The Laughter Age” and noting that it “will have ruled longer than the Ottoman,/but not as long as the Byzantine.”

I’m both moved and amused by this poem’s second stanza:

You will buy me a gyro wrapped in the news, since
many things will change but some do not, and we still need
print journalism. Joy remains a flea market, though pests
have long been bested. We remain fleeing though shoes
are out of fashion, and for that matter so is fashion.

Westhale’s sly inclusion of sonically satisfying wordplay (e.g., flea market/fleeing) serves as a tonic counterpoint to the matter-of-fact recognition of the unavoidable changes occurring during the Laughter Age, and prefiguring a time when laughter will be a commodity of the past. The implicit critique of capitalism’s hunger for the commodification of human experience undergirds the melancholy in this poem; certainly, my amusement is the wry recognition of my having similar feelings in my own life.

Perhaps, at the core, this is what is so satisfying about Westhale’s work in Via Negativa. Despite the many manifest differences between my life and theirs, between my experiences and theirs, Westhale’s lyric inventiveness is a true invitation into the world of these poems. Westhale’s willingness to be vulnerable as a poet allows the reader to find not reflections of their own experiences, but meaningful resonances that engender a powerful connection between Westhale and the reader.

*Reviewer’s note: I reviewed July Westhale’s first book (Trailer Trash, Kore Press); I am a product of the same MFA program from which July graduated (Lesley University); and I consider her a friend. Due to these connections, it is impossible for me to fully consider Via Negativa from the perspective of someone who might discover it in their local independent bookstore. That being said, having such familiarity with her work provides me with a specific lens through which I might engage with this collection. 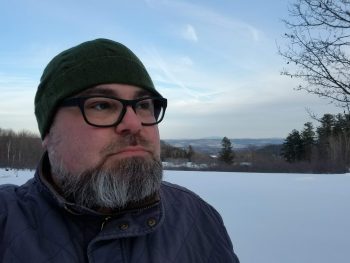 Michael Mercurio lives and writes in the Pioneer Valley of Massachusetts, where he is also a member of the steering committee for the Tell It Slant Poetry Festival (formerly Amherst Poetry Festival.) Michael’s poems have appeared or are forthcoming in Palette Poetry, Sugar House Review, Rust + Moth, Crab Creek Review, and Indianapolis Review, and his criticism has been published by The Lily Poetry Review.
Find him online at poetmercurio.com. 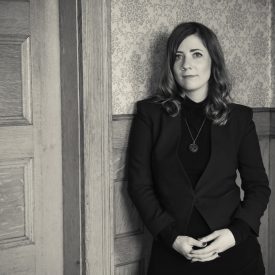 July Westhale is the award-winning author of two books of poetry (Via Negativa, and Trailer Trash, selected for the 2016 Kore Press Book Prize), two chapbooks (Quantifiable Data, and The Cavalcade), and the children’s book Occasionally Accurate Science. Her most recent poetry can be found in The National Poetry Review, Prairie Schooner, CALYX, The Indianapolis Review, Vinyl, Tupelo Quarterly, RHINO, Lunch Ticket, and Quarterly West. Her essays have been nominated for Best American Essays and have appeared in McSweeney’s, Autostraddle, and The Huffington Post. She has received fellowships from Writing by Writers, the University of Arizona Poetry Center, and the Lambda Literary Foundation. www.julywesthale.com