Every weekend we stop in Lufkin on our way to the hospital—north, where hospitals live. Outside the shop there is always a line, five or six people wearing wide straw hats. Sometimes there are super-thin kids worked up with piss. We never arrive early enough to snag a rainbow cookie, though Nikki sometimes says she’ll make her own, post the batch to Facebook.

This time there’s a new family waiting. Gloria waves and sits on the curb. The son is clearly a Gabe, with flip-flops and an itch to climb. Randall the father wears his grease long, keeps bunching his shirt to wipe sweat from his beard. He offers to take photos when customers pose for selfies. “Not like I can run fast,” he says when they decline. The outstretched hand pulls back, the fist stalls halfway.

Randall pulls out another long cigarette and plugs in. He paces on the asphalt, worrying the cookies will run out soon. Halfway through the smoke, he comes up to us. “I can see things, and I see you. I’m fixing to tell you about it.”

Nikki looks up from her phone, smiles like a kingfisher fishing. Randall takes this as an invitation and tilts his head to the sun, exhales. “It seems like the stink of death, at first. I smelled it on you. Anyone can. Sort of like melon rind, where the pink is going pale.”

Nikki’s grin widens, into a warning. A Century 21 veteran comes out of the bakery with two stuffed boxes for her office. Maybe they’re cupcakes, or chocolate truffle cookies, or thumbprint jelly tarts. We move up one in the line.

Randall is grinding his cigarette under a thin sandal. I can hear him humming a bit that sounds like the guitar intro to “Roundabout.” I want to ask him whether it’s the 2003 or 2008 remaster version, but now is not the time—he’s prophesying.

“My wife made these shirts,” he says. “From that old show about friends.” It’s true, and Gloria waves again from the curb to acknowledge his claim. Hers is black with the word Fringed. Gabe’s is pale blue, with Flanged. Randall’s is white, with Flown, though he has marked out the F with a B in black ink.

He touches my shoulder, lightly. A slight push, as if to wake me. 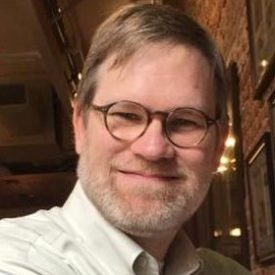