Review and interview by Risa Denenberg
Click ahead to the interview

In my review of Emily Mohn-Slate’s chapbook, Feed (Seven Kitchens Press, 2019), I noted how the book reveals the strains and tensions that overwhelm mothers of infants: anxiety, forgetfulness, exhaustion, loss of identity, guilt, desperation, hypervigilance. Most of the 15 poems in Feed are intimately detailed sketches performed as the scattered thoughts of a new mother who finds the job to be so more than she bargained for. In the title poem, the speaker says, “I never meant to be so needed.” And it is clear that Mohn-Slate is the speaker in these poems.

When I learned of a new, full length collection by Mohn-Slate, I purchased it. The Falls (Prize Winner: New American Press, 2020) is a reification and amplification of the work in Feed, containing a few of the same poems, with a complement of poems that anchor close to home but then stretch far into the distance. I love a poet who cannot leave well-enough alone. Mohn-Slate knows too much to hide in the small reality of her own life. She has the craft and craftiness of finely-tuned perception. When she says, in “Lightening Flowers,” “the future the most / beautiful, terrible thing,” it is more than evident that she finds the bewildering world at once terrifying and precious. It is her openness to Keats’s concept of negative capability that is the underlying principle in her work.

Many of Mohn-Slate’s poems read as reportage, recounting events near and far. In “So Easy,” she announces, “A woman left her baby in the car, / rushed to work—her baby overheated & died.” In the title poem, “The Falls,” she reports: “A woman on her honeymoon / climbed down to the falls alone.” This wildly eccentric event is withheld until the poem’s sixth stanza. The tale described in those two lines apparently appeals to the poet because waterfalls are, themselves, so horribly magnificent. She starts the poem by describing the distance she is willing to travel to find the danger in beauty as well as the beauty in danger:

The mist curves a fist,
coiling to strike.

Mohn-Slate pays quirky attention to distances while possessing the earned wisdom of perspective. It is as if, in writing poetry, she has learned how to escape the fate of her own ordinariness. In “The Anatomy of Distance,” she asserts, “distance is best left in rain,” and concludes the poem this way:

other things—your yellow tie
the orchid crumpling on your windowsill.

From here, anything
can be another thing.

There are large and small wisdoms gleaned in “The Ant’s Small Face,” which begins, Whitmanesque, with “Let me sing of the ant,” and concludes with scant apology when she delivers the inevitable, “Let me show you how / I bring my hand down / hard, regretting briefly / what has to be done.

Mohn-Slate leads the reader through intimate gestures and experiences: a routine gyn exam in “Wednesday Morning and I’m Being Opened”; remnants of grief in “Still Life with Ex-Husband Lingering”; or the likeness of a boxed wedding dress to a coffin, in “The Dress-Preserver.” But normal days are also filled with inescapable perils, as she lists news items from “[t]his week’s email update,” in the poem, “Maybe”:

And later, at the end of the poem, her connection crystalizes in a memory,

As a delightful aside, scattered throughout the book, Mohn-Slate also uncovers her relationship with her secret guardian, Charlotte Mew. If you are not familiar with Mew (15 November 1869 – 24 March 1928), she was a tragic cum-admired poet among London literary figures of her time. Her poetry was considered unique in “its quality of depth and stillness.” She is described as “a tiny woman with short hair who wore tailored men’s suits.” My own press, Headmistress Press, recognizes her as a legacy lesbian poet, and our annual chapbook contest honors her name. So it’s not surprising that I was charmed to find that Mew is also a heroine to Mohn-Slate.

Her connection with Mew is through letters— a time-honored means of communication over space and time. There are two epistles to Mew in Feed, and there are three additional ones in The Falls. I am not the most romantic sort, but I well-up to think of how Mew, in her sisterly despair, comforted and cared for Mohn-Slate, in the manner of muses of poets from all eras and places.  In “Dear Charlotte Mew, July,” she confesses,

the loneliest fields in me.
//

Is it enough to say our wounds are sisters?

In true Mohn-Slate manner, she visits Hampstead Cemetery, where Mew is buried. Sitting beside her grave she mourns, “Such slight inches of earth between us.” She laments in “Dear Charlotte, July,” “I wish you were famous enough for them / to have kept your home intact.” The poem continues her passage from then to now,

On the way here, I passed the London Pride parade,
I imagined you holding Ella or May’s hand
instead of your own faded lapel.

In “Dear Charlotte, November, she identifies with her heavy-laden poet-muse:

My shoulders wedge into a box, hammered shut by others, their
needs heavy on my chest.

What I mean is, you are the only one who might hear me, and you
are still dead.

Because the epistles to Charlotte Mew engaged me so deeply, and because they establish the sort of bond between poets past and present that allows poetry to endure, I wrote to Emily Mohn-Slate and asked her to tell me about how this relationship came about. This a portion of what she wrote back, edited a bit for length, with her permission.

An Interview with the Author:

Risa Denenberg: When, where, and how did you become acquainted with Charlotte Mew?

Emily Mohn Slate: I met Mew in a chapter of Eavan Boland’s book A Journey with Two Maps: Becoming a Woman Poet. Boland writes of Mew’s poems, “Their conversational staccato, played off the truncated cadences of Victorian lyric, gives a studio acoustic to the voice. The voice — and this is unusual in that era — signals from its margins and its music through tone.”  …

I wrote a short response on Boland’s book for my graduate work, focusing on the chapter about Mew, and April Bernard, one of my professors at Bennington, recommended that I read her work in more depth. Little did she know how much Mew and her work would come to mean to me. The more I read, the more I developed a sense of curiosity and admiration for Mew. I was drawn in by the kinetic music and singular voice of her poems. …

I went to London that summer for my honeymoon and decided to look for her grave. Even her grave was difficult to find. I wandered Hampstead Cemetery aimlessly for a full hour before […] I found a hand-drawn map of notable inhabitants of the graveyard. And finally, her name: Charlotte Mary Mew. Even after striking off in the right direction, it still took me another half hour. Her grave had toppled over, lying flat in the ground, and was partially covered with weeds and straw.

This is how poetry saves us, those who read it and those who write it. If we are lucky, or studious enough, or desperately lonely, sometimes only a muse, distant and departed, might save us. May you find yours. 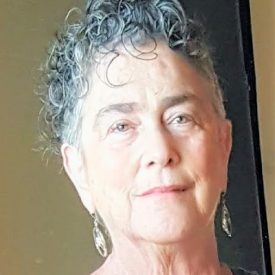 Risa Denenberg lives on the Olympic Peninsula in Washington state where she works as a nurse practitioner. She is a co-founder and editor at Headmistress Press, publisher of lesbian/bi/trans poetry, and the curator at The Poetry Café where poetry chapbooks are celebrated and reviewed. She has published seven collections of poetry, most recently the full-length collection, slight faith (MoonPath Press, 2018), and the chapbook, Posthuman, a finalist in the Floating Bridge 2020 chapbook competition. 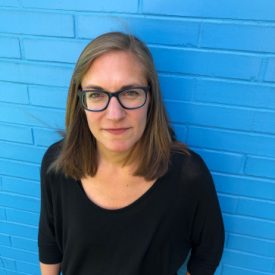 Emily Mohn-Slate is the author of THE FALLS, winner of the 2019 New American Poetry Prize (New American Press, 2020) and FEED, winner of the 2018 Keystone Chapbook Prize (Seven Kitchens Press). Her poems and essays have appeared or are forthcoming in AGNI, New Ohio Review, Racked, Crab Orchard Review, Muzzle Magazine, Tupelo Quarterly, The Adroit Journal, and elsewhere. She’s a graduate of the Bennington Writing Seminars (MFA), Boston University (MA), and Colgate University (BA). She lives in Pittsburgh, PA, where she teaches high school English at Winchester Thurston School and teaches poetry workshops for the Madwomen in the Attic at Carlow University.