In the middle of the night
they woke nude as newborn rats
vascular, milky and afraid

Come spring, I went down to the valley where the river asked for nothing
but tithes of mud and bone
My lungs inflated and deflated and were sails
When dusk drew near and the silhouettes of rats replaced the geese
my lungs were two rats married for life in the tomb of my chest
As I slept they exchanged their vows              in windy koans
the sword of my spine between them.

As a child, I hacked all night and worried
that the desert wind of the heating vent would turn them inside-out
for the slow-dawning facts of my life to dissect
This was their courtship, halting, excited, implacable hours
in doilied parlor while the parents sat in earshot
hashing out the long-term budget
plus or minus doctor’s bills.
Fever dreams melted the paint on the wall to gasoline
and every cough that woke my father was a match.

I lived on the highway and fed them exhaust
tried to smoke them out to prove they existed
in the rat-gray light
The supermarket tripe was beyond the pale
of my forgiveness             pocked cells and pockets
melded into single scar.

All of us are trees; we just can’t see that
without X-rays
We are hollering hayfields
When I lived in the hayfield    my lungs buzzed with gnats
that were pulsating stars in the night
and every breath was foraged with efficient claws and teeth
and every gleam of dawn was glean glean glean 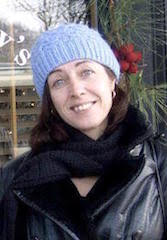 Ellen McGrath Smith teaches at the University of Pittsburgh and in the Carlow University Madwomen in the Attic program. Her writing has appeared or is forthcoming in The New York Times, Gargoyle, The Seattle Review, The Collagist, The American Poetry Review, Los Angeles Review, Quiddity, Cimarron, and other journals, and in several anthologies, including Beauty Is a Verb: The New Poetry of Disability. Smith has been the recipient of an Orlando Prize, an Academy of American Poets award, a Rainmaker Award from Zone 3 magazine, and a 2007 Individual Artist grant from the Pennsylvania Council on the Arts. Her second chapbook, Scatter, Feed, was published by Seven Kitchens Press in the fall of 2014, and her book, Nobody’s Jackknife, was published in 2015 by the West End Press. www.ellenmcgrathsmith.com