At this writing, I have called New York City home for three decades—several years more than I’d been alive when I moved here. I have lived in Harlem, though mostly in my current home of Brooklyn, and I’ve worked in Manhattan, Queens, and the Bronx. I got married in Prospect Park and sent my children to public schools in Brooklyn and Manhattan. I have served on two juries, voted in eight mayoral elections, and watched the progression from one-dollar subway token to $2.75 MetroCard. I am a New Yorker.

Or am I? I ask this because I wonder whether, if I were truly convinced of and secure in my New Yorkerness, I would still feel the urge that comes over me once a week—on Sundays. I have not seen all of the United States, but I’ve seen enough to know that much of it shuts down on that day. Not my town, though. That, to me, is the mark of a vibrant city, and there is no better time to be in one than Sunday. You can appreciate what’s around you in a way that isn’t possible when you’re rushing to get to work on time or hurrying to lunch with a client. Gone by Sunday, too, is Saturday’s frenzy of celebration. Still at leisure, but with our feet back on the ground, we can take in a city that has slowed down just enough to be seen. This balance of our awareness, the city’s magnificence, and its—and our—unhurried pace is a magic formula, making it possible to revel in our New Yorkerness, to do that quintessential thing that lets us feel a part of this place. The urge I have on Sundays is to do that thing, my only question being—and I’ve been here thirty-two years—What is it? A classic movie at Film Forum, or a Yankees game, or a visit to the Brooklyn Museum, or brunch at Sylvia’s, or lunch at Katz’s Delicatessen, or a ride on the Staten Island Ferry, or a tour of Louis Armstrong’s house? I have enjoyed all these things, but the problem with doing anything at all, in any place at any time, is that that thing precludes everything else, which won’t cut it if the point is to feel of a piece with a city whose essence is unlimited possibility.

On a recent Sunday, in search of an answer, I turned to a movie from the early 1960s. As with many other movies, I had seen part of it on TV when I was a boy; I had retained very little beyond its title, but this particular title alone had led me to search for it online over the years, always finding it unavailable—until recently. Finally, I had in my hands the work that would yield, if anything could, the secret to capturing the feeling I was after. What better way, after all, than to spend part of a Sunday in New York watching a movie called Sunday in New York? When it was over I felt, if I may be permitted a comparison to another film, a bit like Dorothy after she sees the wizard behind the curtain. Sunday in New York is a very enjoyable sex farce that is nonetheless dated by the very thing that must have once made it seem so fresh: the burning question of whether a “girl” should or is expected to bed the guy she’s out with. Unlike many works whose day has passed, this one gave me the brief, sad feeling that mine had, too, and not just because the movie was released in the year of my birth. When the twenty-two-year-old Jane Fonda character referred to her parents back in Albany, I realized that those obviously settled folks, not important enough in the movie even to appear on screen, were probably younger than me. More pertinently, this sweet love story, while set in New York on a Sunday, is not about Sunday in New York; shots of rowing in Central Park aside, the setting could be Chicago or San Francisco. I liked the movie, but it didn’t have much to tell me.

I was on my own, back to my original question. It might help, as they used to say where I’m from, to break it down. What are the elements of this quintessential New York feeling or experience? What are the things that say “New York” to me? Literature—elegant sentences or verse by the writers, so many writers, who have come here; music— strains from the meeting place of jazz and symphony, grand but playful and unpredictable like the city, works by Duke Ellington, say, or George Gershwin, or Charles Mingus; people—seeing so many walking this way and that. On another Sunday a while back, I tried for some of this. At home I had The Symphonic Ellington playing while I read Auden poems, works that are themselves like the city, beautiful and elusive; from time to time I looked out my living room window at bare tree limbs silhouetted against the gray-blue winter sky. After a while I took the Auden collection with me to a diner down the street, where I read while sipping black coffee and watching strangers go by the window. I thoroughly enjoyed myself, though eventually something occurred to me about this afternoon of experiencing New York: I had barely left home.

But maybe, if this quintessential New York experience can be even partly achieved in one’s living room, it is largely a state of mind. And maybe any New York activity, incomplete though it may be, is the real deal for that very reason: its incompleteness proves you’re in the right place. You can take in all of Hudson, New York, in an afternoon. Not so New York City. You get there only a piece at a time, and you never get there. And if you did, what then? Would they let you ride the subway for free? The frustrating thing about New York is also what makes it oddly comforting: you can’t do everything there is to do, any more than you can read every book ever published or watch every film ever released—which means you will never run out. For the completists among us, it may be better to think of each little piece as a DNA sample, making do for the whole. Maybe you live here; maybe you visited once; either way, you’ve had part of the experience. I will try to remember this on some Sunday while looking down the long, long stretch of Park Avenue as I walk along in the East 80s, on my way to the Metropolitan Museum of Art. 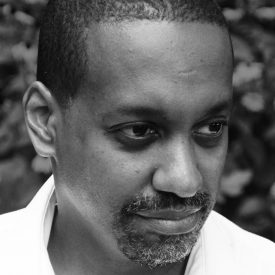 Clifford Thompson received a Whiting Writers’ Award for nonfiction in 2013 for Love for Sale and Other Essays, published by Autumn House Press, which also published his memoir, Twin of Blackness. His personal essays and writings on books, film, jazz, and American identity have appeared in publications including The Best American Essays 2018, The Washington Post, The Wall Street Journal, The Village Voice, The Times Literary Supplement, The Threepenny Review, Commonweal, Cineaste, and The Los Angeles Review of Books. He is the author of a novel, Signifying Nothing, and his poems have been published in journals including The Georgia Review and Clockhouse. For over a dozen years he served as the editor of Current Biography, and he has taught creative nonfiction writing at the Bennington Writing Seminars, New York University, Columbia University, Queens College, and Sarah Lawrence College. His book What It Is: Race, Family, and One Thinking Black Man’s Blues will be published in 2019. He lives in Brooklyn.