Picture this, you piece of shit: You’re actually having a pretty good year. You’re doing well at work, and really, you’re lucky to have the job. It’s not easy to make real money waiting tables in your college town, but you work at one of maybe three places where it’s possible. Some days you walk out with three or four hundred bucks, passed to you by elderly women eating cups of clam chowder with an ice cube in it and employees from the DMV down the block, who are all unvaryingly brusque but tip well. You don’t really know where all this money goes, but you’re almost always strapped for cash, even though rent is dirt cheap compared to the city you came from and you dropped out of school last semester, so tuition is no longer a concern.

You do have certain habits. Your shifts at the restaurant are very long, and they leech something from you. There is a toll that must be paid for the endless loop of small talk so cheerfully banal that it sometimes feels like you are actively erasing yourself in real-time. After work, your hair is an oil slick and your makeup has melted off and your armpits smell like a rabbit warren. Your overall dishevelment feels like it’s occurring at a cellular level, but you’re still fucking parched.

You feel acutely seen at the bar after work; the bartenders know your shift preceded theirs and they know about your thirst. They know you will reliably put down six double vodka sodas in quick succession—one every twenty minutes for two hours—and that, since they won’t charge you for them, you will tip twice the price of each drink, in solidarity. The currency and liquids that change hands feel like favors, like gifts from generous gods.

The bartenders look out for you, and you for them. Every night, you come bearing gifts: styrofoam containers full of cold breaded shrimp and fries, thermoses of red clam chowder, which is always leftover because people only order the white. They will intervene if they see you leaving with anyone too sketchy, and they sometimes invite you to do blow with them in the back if it’s been a particularly rough night. When you walk in, before you even go up to the bar, they’ve already got the glass out, pouring the vodka heavy and slow, adding three slices of lime, just the way you like.

They feel what you feel. They have to use that same solicitous expression as they smile at the other patrons. Because of this, they don’t pass judgment as you become a blurrier and blurrier version of yourself, as you slump on neighboring shoulders, overshoot your turn on the ironic shuffleboard table in the corner, and spend at least an hour each night showing off at the jukebox, holding forth about what which tracks you’ve selected and why, to anyone who will listen. They laugh when you tell them you think your drinking and sexual compulsions exist because you listened to Exile in Guyville on repeat for all four years of high school. They probably know you’re a piece of shit, but their faces never show it. They pour your drinks and regard you as if you are fun-loving, not pathological.

There are things you try not to think about at the bar. You try not to think of ____________ and the conversation you’ll definitely have with him later when you’re drunk enough. You try not to think of how your body no longer feels like your own or of your parents and their disappointment (which you have thoroughly earned). Around your fourth drink, you feel strangely inflamed with possibility and you definitely don’t think about how all the futures you thought you could have are now eclipsed by what’s in front of you: the restaurant, this bar, and an unbroken string of days whose tasks and rhythms you can predict.

When you are sober or drunk enough, you fear that you and ____________ have done irreversible harm to one another, even though it seems unfair that this would be possible so early in life and with someone you loved so well. You goddamn idiot, twenty-eight isn’t that young. Of course it’s possible. Fact is, it’s been seven years and three months now, the front half of which you spent trying to be with him and the back half trying to stay apart. You’re unquestionably failing at both, with no end in sight.

You were an idiot back then, too. You couldn’t believe your good fortune; you couldn’t believe you’d effectively tricked this boy––who was certainly above your paygrade, at least looks-wise—into liking you. All it took was three really outstanding mixtapes and a few weeks of dopey flirting. He seemed perfect to you then: his snaggletooth and secret weirdness and horsey face and the soft hair on his forearms. Typical. From the second you met, it felt unreasonable not to love him.

Since you “split up” with ____________ and moved here three years ago, you’ve done your level best to cast your affection elsewhere. Really, you have. For a while, almost every night was spent with someone different, but lately it’s been the mean day bartender from work who likes to put a hand around your neck while he fucks you, digging his fingers into the tender spots behind your ears until your vision goes white. You cannot, in all honesty, tell the bartender you don’t enjoy this, because you do.

You like how the pain feels like it could leap out of your mouth and become visible in the air before you, so sharp and ugly you’d have no choice but to slap it away. You like how it makes your mind lurch like a crazed bird seeking flight. Your submission is not peaceful; there is astonishing violence in the way you press your throat up under his hand. You never liked this with ____________ because you knew he’d have to force himself to do it, and purity of intent matters to you. The mean bartender’s face is brutal and ecstatic above yours, absent any internal conflict, and you’re so grateful for the honesty of this, for how he can’t pretend he doesn’t want to hurt you.

You sneak out of strange beds and blunder out of bars at last call to leave sobbing messages on his voicemail. Once, you accidentally wake up the mean bartender when your conversation with ____________ ruptures into a screaming fight after he tells you it might be time to dry out. The bartender, roused from your bed, grumbles and pinches your thigh. You hang up. Fuck you, you say to the bartender when he smirks at you and then rolls over and goes back to sleep like it’s nothing, without even checking if it’s cool for him to keep staying over, which it isn’t.

You try to picture yourself receding from all of this like something caught in a riptide, as if the pull of your future, better life might––even as you fought against it––drag you away and deposit you on some blank new shore. You think sometimes that you don’t actually love ____________ anymore, if you ever really did. Maybe what you love is stasis. Maybe ____________  is not a person to you anymore, but a mechanism that lets you stay drunk and listless. Maybe you have catastrophically weak character, as you’ve always feared, and this is an ordered settling-in to the kind of life you deserve.

You’re a piece of shit, but all things considered, you have been doing okay recently. You nearly remembered to call your mom on her birthday this year. Sometimes on your days off, you actually get out of bed and take a shower. You’ve made really good hummus a half dozen times, adding basil or kalamata olives or harissa. You’re almost someone with a signature hummus recipe. Maybe this is what “okay” looks like.

You’ve only gone to one meeting, and it was nearly a year ago. You went with an older waitress from your work, who you used to be able to count on to match you drink for drink. At the meeting, she stood up and said that her mother had just died and that she wanted to change. Only she didn’t say “change” she said she wanted to “be different,” and when she said it every person in the room nodded avidly in recognition, as if being different were both possible and necessary. Their collective hopefulness was so pitiful and dignified that tears came to your eyes. Afterward, when the woman from work asked what you thought of the meeting and showed you a picture of her mother in the hospital before she died, you started crying, actually crying, in a way you hadn’t done sober for years.

The next time she asked you to go, you told her you had to work and the time after that you told her you had plans, and then she didn’t ask again. She quit the restaurant shortly afterward, and months after that you heard she’d moved to Phoenix for a job doing SEO for some company that sells supplies to massage therapists, so maybe being different is possible after all. You’ve been thinking about this a lot lately. Maybe the trick to improving your life is to act like your recovery is a foregone conclusion, to look at your future self as a benevolent and worthy stranger, for whom you want the best.

You know when and where that meeting is held. Every day since you went with the woman from work, you’ve felt your distance from it like a phantom limb. So why not go, you piece of shit? You can still see the outline of that different life in your mind’s eye, even if you don’t want to admit it. You can imagine yourself working a job in some office building in a different city and coming home to a clean little apartment to make a sensible dinner.

You can imagine yourself not returning ____________ ’s calls; you can even imagine not stilling his name at the back of your throat, like he’s some kind of demon that could be accidentally conjured into existence at the sound of your voice. You can imagine going back to school, apologizing to your parents. You can imagine summoning a lost iteration of yourself back to you, the curious, ebullient trier with the humiliating need to please. You can imagine yourself in fifteen years at some dorky open mic night with two dozen other burnouts, raising your hand to read a story you wrote about your own recovery in tedious metaphors, having a great time.

So. Just go to the goddamn meeting. Go and sit there with the other drunks and get overly invested in everything everyone says and let the world turn its volume up until it boxes your ears unbearably and let that rancid fear sweat pit out your favorite sweater and then when it’s your turn to share, just say it.

I’m an alcoholic and I want to be different.

Admit it: you’re such a fucking idiot that you still believe things could turn out all right for you. You’re going to build a boring, true little life for yourself, then burrow into it like a tick.

So go. Sit there. Listen. Cry if you have to. 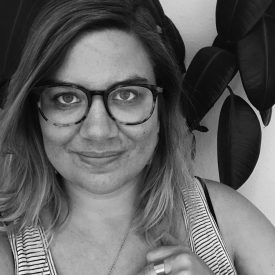 Born and raised in Seattle, AJ Strosahl is a writer who now lives and works in Oakland, California. She has work published or forthcoming in Cleaver Magazine, Oyster River Pages, Blue Earth Review, Ruminate, and other outlets. Her essay, “Dogs I’ve Read,” was recently a finalist for the 2021 VanderMey Nonfiction Prize. In 2022, AJ will be an Artist-in-Residence at the Vashon Island Arts Residency and the Bryn Du Art Center. She is at work on a novel.