In her first book of poetry, Montana-raised, Pittsburgh-based Gail Langstroth offers a bilingual (English/Spanish) collection of spare, challenging, rewarding pieces. Langstroth came to this project as (among other things) a longtime lecturer on and performer of eurythmy, the century old dance-related performance art. She characterizes eurythmy on her website wordmoves.com as “an art of movement as spiritual path.” We would expect this experience to inform her verse, and indeed she acknowledged as much when the question was put to her during her December 2020 book launch:

[I]n eurythmy, we’re recognizing . . . the shape of the air when we speak; that when we’re speaking, every sound makes a gesture in the air. And I then attempt to make those gestures visible, to come back to the picture of language…through the sounds of speech. So I’m basing my movements on the sounds of speech that are in me, in us . . . You might say the poetry thing is a very inside eurythmy dance.

“A very inside eurythmy dance:” a gestural expression of particular relationships between sound and interiority.

This gestural basis both helps to explain her poetry’s spareness and points to one of the challenges it invites readers to undertake: to read her poems in some measure as “eurythmy dances.” What does this way of reading look like in practice? firegarden’s opening piece, “murciélago” (bat), offers a sort of primer:

yes, but bat is not my name.
I come from smaller places,

I come from holes where light hugs closest
and love, a sharp pin, points upward.

no, murciélago is not my name,
but bat is how I think.

The poem starts with a common Spanish noun, murciélago, which is simultaneously the poem’s title and a name the speaker is called. We are then moved beyond the fixity imposed by the act of naming (“bat is not my name”) in two steps. In the first, the speaker associates her origins with “smaller places, / betweens”—chinks, pinholes—which are less places per se than conduits for sound (“cricket echoes”) and light. She is, she asserts, a creature not of a certain nameable place but rather in the expressible-as-movements of between-places—the filling, landing, hugging, pointing. In the second step, she moves inside the name she has been called, murciélago/bat, expressing it in associations with and qualities of the creature the name denotes: “dove of night. / black. leathery.” I imagine this stanza as a sort of score for part of “a very inside eurythmy dance”: the words she chooses form the “picture” of “the sounds of speech” in her, which a eurythmy performance would then manifest as gesture. This constellation of words, sounds, and implied movement is an expression of her assertion in the final stanza that “bat is how I think.” As such, that concluding stanza could be said to offer a summation of the distinction the poem’s two-step movement has brought us to: name/referent, the assertion of essential equivalence (“murciélago is not my name”) v. sound/interiority, expressed as movement (“bat is how I think”). “Movement as spiritual path” to the realization of oneself, communicated through the medium of poetry. (Langstroth characterizes “poem” on her website as “a prayer rug (perhaps) where / The Self stands & sculpts / the ONEWORD : I.”)

This relationship among language, movement, and self is one that Langstroth explores throughout her collection. As we read, we find that language’s role in the form of ceaseless inner activity that is the essence of self remains ambivalent, at once vital (“the ONEWORD”) and problematic due to its tendency to impose, or at least imply, fixity or stasis. The short poem “speech” thematizes this ambivalence. The poet characterizes words, the products of the speech act, as “pale petalbreaths fad[ing]” “brown on the ground,” and enjoins the reader to “know where you have come from/know the shape you want to take/cherry almond plum” (italics in original). Our words, that is, do not capture or fix our essential inner activity. Rather, they serve as ephemeral vessels (“petalbreaths”) for the “shapes” that manifest that activity—the gestures in the air created by speech and the inner “ONEWORD” of which they are expressions. It’s up to us to be present to (“know”) and “take” those shapes in a constant process of spiritual renewal.

Another short poem, “the cycladic harpist sits,” develops these ideas at greater length. According to a note on the poem, the harpist is based on a marble figure from the Bronze Age Aegean Cycladic culture. The harp is represented in this figure by an empty frame resting on the harpist’s lap, which the poet evokes by describing the harpist “hug[ging] her unstrung.” This observation generates the following meditation:

I think this
is the way with the dead—

we clutch the empty
they pluck our unstrung

Here, the empty harp frame is the shape of the latent “sounds of speech that are in…us,” the shape we are enjoined to “know” and “take” in the poem “speech.” However, though “we,” the living, are the ones who manifest these latent sounds as expressions of our inner activity (in this case, by making music), we cannot “clutch” those expressions. That is, we cannot hold onto that music as some sort of fixed, permanent sign of who we are: our hands will grasp at empty air if we try to do so. By the same token, it is the dead who “pluck” our harp because the instant its latent sounds (the musical notes) find expression, the instant they fall into and shape the surrounding air, they begin to fade, to die, like the “pale petalbreaths” in “speech.” The verb “pluck” implicitly analogizes the sounds drawn from the harp strings to fruit taken from a tree, of which the petals in “speech” are a harbinger (“cherry almond plum”). This is the paradox of ripeness: the fruition of any creative act occurs at the moment when the full, unrealized potential of life passes over into the limiting, temporal realm of death—a reality ironically underscored by the fact that the sculptor who created the marble figure in the poem and the culture to which they belonged have long since passed away. And it’s because of this paradox that “know[ing] the shape you want to take” must be an ongoing process.

In her explorations of these themes, Langstroth’s language at times has an oneiric quality, e.g., “holes where god’s blunt/enters” (“on a hill”) and “the place of emptied snow” (“a clear white”). This arresting feature derives, I suspect, from language’s role in giving shape to her own interiority—her “ONEWORD”—a task that must remain untranslatable beyond a certain point. We are, however, always aware of the poet’s close attention to her words; and in that awareness, we find an invitation to be similarly present to them and to the silence around them, pregnant with the possibility of renewal—our own as well as hers. The book’s title poem, fittingly, provides us with one of the most explicit extensions of that invitation, and fullest explorations of the challenges involved in accepting it:

a door where you see
light fold in

you have ash
feel what ash means

its weight
and soot body broken

place yourself there
until burning

turns to blooming
for your firegarden

“firegarden” offers us another metaphor for spiritual renewal, but one that emphasizes the ambivalence of the process. Death is not merely acknowledged as part of this process (“pale petalbreaths,” “pluck our unstrung”): we are enjoined to place ourselves in and feel its violence, the way the burning of our accumulated deadness breaks us, while at the same time embracing the new possibilities that breaking opens to us—the “blooming” of the phoenix-like “firegarden.” This visceral emphasis is further enhanced in the final lines by a eurythmic-like component that gives the spiritual renewal the poem describes a literal physicality. The transformation from “burning . . . to blooming” is a movement not just in our spirit, but also in our mouth, as the inward curl of our tongue (“bur”), which mimics the withering of a petal or leaf in flames, gives way to our tongue’s outward thrust and the funnel-like flex of our lips (“bl-oo”), like the stamen and petals of an opening flower. Placing ourselves there, in our tongue and lips, we can feel the shaping of these “sounds of speech that are…in us,” and thereby experience something of the incarnation-in-movement of our spiritual life that is eurythmy’s essence. Langstroth’s invitation to be present to the immanence of movement in her poetry, to feel the poems in our body as well as our spirit, is one of firegarden’s greatest challenges, but also one of its greatest rewards.

Raised under the Big Skies of Montana, Gail Langstroth is a tri-lingual lecturer, international eurythmy performer, translator, poet and film artist. She is a graduate of Drew University’s M.F.A. in poetry, winner of the Patricia Dobler Poetry Prize, 2011, and poetry editor for the European art journal Cyte Magazin. Get Fresh Books released Langstroth’s bilingual firegarden / jardín-de-fuego, (2020). Voiced: words from asphalt, Langstroth’s recent film, is being showcased in European festivals, (2021). Langstroth teaches and performs internationally. Alongside her work as the movement consultant for the Lemington Gospel Chorale of Pittsburgh she mentors for Carlow University’s Madwomen in the Attic writing workshops. www.wordmoves.com 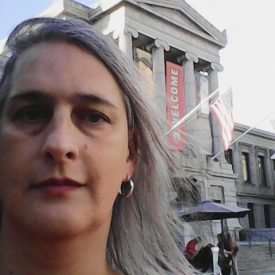 Maine native Anastasia Walker is a queer poet, essayist, and scholar living in Pittsburgh. Her poems have appeared in several journals, and her first book of poetry, The Girl Who Wasn’t and Is, was published in February 2022. Her autobiographical essays have been published in Shenandoah, Fourth Genre, and The Rambling. She has blogged on politics, social media, and LGBTQ+ issues for both Huffington Post and Medium. She’s a proud member of her community’s Indivisible group, a passionate amateur photographer and musicologist, and a lover of long walks and (when she visits home in the summers) swimming in the ocean. Her blog: https://anastasiaswalker.blogspot.com/.