All the larger streams of uncultivated countries are mysteriously charming and beautiful…The finest of the forests are usually found along their banks, and in the multitude of falls and rapids, the wilderness finds a voice.
–John Muir

“Pileated!” Don shouts, walking ahead with an eye out for snakes, hearing the telltale piping “yuk, yuk” of the woodpecker hidden in a canopy of leaves. “Hear it?” Brenda says farther up the trail, “a blue-gray gnatcatcher,” identifying another bird by its song.

Later, we pass below a kettle of vultures and, listening among cliffs more “interestingly sculptured” than the “grandest architectural works of man,” hear a series of slurred notes ending like a question, and she stops again. “That’s a red-eyed vireo.”

In 1867 John Muir walked along The Hiwassee, “its surface broken to a thousand gems” by a stony bed “of upturned rock,” listening to the “songs it sings” and today we follow, stopping here and there to take in the roar of “resounding cataracts.”

We name wildflowers beside “forest walls vine-draped and flowery as Eden.” Jennifer and Nancy, their well-worn wildflower books handy, spot the violet phacelia that spreads through the meadow at the trailhead and crops up all along the path.

They find hearts-a-bustin’ wearing its heart on its leaves.

They talk and laugh, but the flowers are mute. Hairy beard-tongue droops without saying a word, and the dainty, white flower bells of Solomon’s seal dangle silent beneath long, waxy leaves, the wildflowers keeping their secrets.

“Is it oxalis?” Jennifer asks—or maybe it’s Nancy—but Barbara, sharp-eyed, offers a caveat: “It doesn’t have those sorrel markings we saw before, does it?”

A flower that looks like meadow parsnip turns out, after much debate, to be golden Alexander, which we all agree would make a great name for a cocktail, Ruth inventing the ingredients on the spot.

We crack up at the dactylic rhythm of “pipsissewa,” which means “broken into small pieces,” like the river itself, and when we come upon a pink azalea in full bloom, we give out a cheer, creating our own music.

Fire pink, mayapple, lyre leaf, and dewberry. The names have poetry in them. Yellowroot, bloodroot, chickweed, and phlox. As I string them out they make sentences, nouns forced into service as verbs.

The dog hobble spurge as the wild yam galax, river cane, cohosh, the blue-eyed grasses, and crossvine rue the rattlesnake weed—flowers making a hash of our syntax, but in that verbal garland we hear the primordial logos of the planet speaking again,

and “in the multitude” the “wilderness finds a voice.” Wood anemone stonecrop foam flower as little brown jugs of wild ginger columbine among spiderwort and squaw root, the wood’s floor singing like the river through the upturned rocks of our words. 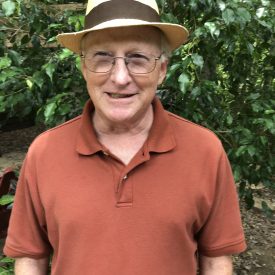 Steven Harvey is the author of a memoir, The Book of Knowledge and Wonder, and three collections of personal essays: A Geometry of Lilies, Lost in Translation, and Bound for Shady Grove. Two of his essays have been selected for The Best American Essays: “The Book of Knowledge” in 2013 and “The Other Steve Harvey” published in 2018. He is a Senior Editor of River Teeth and the creator of The Humble Essayist website.