Bob Hope is born near London and immigrates to Ohio when he’s four (his father has a bridge named after him in Cleveland). Song and dance comedian. The Big Broadcast of 1938 and “Thanks for the Memories.” Co-stars with Bing Crosby and Dorothy Lamour more times than he can count. Lived to be 100 because, he emphatically claimed, “I get a massage every day, sometimes two.”

Igor Stravinsky’s The Rite of Spring has its world premiere at a theatre in Paris. Choreography by Vaslav Nijinsky. Dancers provided by Sergei Diaghilev. Public riot provided by the audience. “You call that music? You call that ballet? You call that art? Let’s scream so loud, the dancers can’t hear the music. Let’s throw punches and fall into the orchestra pit.” And they do. Forget the synopsis and structure, conception and composition, The Adoration of the Earth and The Sacrifice. “Hot-diggity-dog,” Igor exclaims backstage with this thick Russian accent, rubbing his hands in uncharacteristic joy. “It’s a hit!”

John Barrymore is rushed to a Los Angeles hospital after collapsing during an appearance on Rudy Vallee’s radio show. His body can’t decide if it should succumb to liver failure, kidney disease, heart ailments, or pneumonia. “Hey, John, hurry up and take your pick,” the body whispers. He responds in anger: “Die? I should say not; no Barrymore would allow such a conventional thing to happen.” At 10 PM, the conventional thing happens.

Edmund Hillary, professional beekeeper, becomes the first man to reach the summit of Mt. Everest. His trusty Sherpa guide Tenzing Norgay (the perfect Jeopardy! answer) gives him a hand. A few years later, he decides to visit the bottom of the world and participate in the first crossing of Antarctica by vehicle. He wasn’t afraid of the earth’s top and bottom, but he couldn’t bring himself to propose to his future wife, so he asked his future mother-in-law to do it for him. Just keeping it in the family.

A skinny kid is born in Cleveland’s Slavic ghetto. He grows up to be a hyphenated American. The son of immigrants, he can’t pronounce his English diphthongs without breaking into a sweat or an impression of Jimmy Durante. “Come to my room in half an hour and bring some rye bread,” he says to the silent Ukrainian girl next door. Much to his surprise, she does, fixing lunch and breaking his bed in the process. “Sweet Jesus,” he echoes his mother’s prayer whenever she crosses the busy intersection of Union and Broadway. “What a country!” 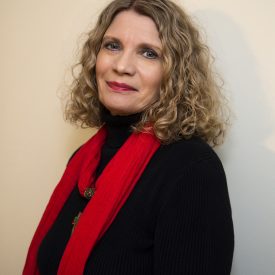 Linda Nemec Foster is the author of twelve collections of poetry including Amber Necklace from Gdansk, Talking Diamonds, and The Lake Michigan Mermaid (2019 Michigan Notable Book co-authored with Anne-Marie Oomen). Her work has been published in magazines and journals such as The Georgia Review, Nimrod, Quarterly West, Witness, New American Writing, North American Review, Paterson Literary Review, and Verse Daily. Foster’s poems have also appeared in anthologies from the U.S. and U.K., been translated in Europe, inspired original music compositions, and have been produced for the stage. A forthcoming book of prose poems, Bone Country, will be published in 2023 by Cornerstone Press (University of Wisconsin—Stevens Point). She was awarded second prize in the Fish Anthology’s 2022 Flash Fiction Contest. Foster is the founder of the Contemporary Writers Series at Aquinas College.