Months ago you told me a joke. I contorted my body, experimented with angels. How you interpret the joke you said depends on whose world you live in. Between the leaves the sun was casual with its subatomic particles in collision. Is the joke tragic? That wasn’t my question to ask. The petals fit the backdropped sky like a children’s mask. Water dripped from the neighbor’s spigot as the planet held tight to its pocket of time. You told me the joke and the next day I saw tiger lilies everywhere. I wasn’t sure if I had just begun to notice them or if there had been some massive overnight planting. Little almost-black spots against orange bloom. Sunburst. A real, primal heat. That night I buried myself in the computer screen and read about spring flowers. I read about the rising sun and then the Manhattan Project. Lise Meitner wasn’t awarded the Nobel Prize for her work on nuclear fission. Later she abhorred the creation of the bomb and refused to participate. Maybe she heard the news on the radio one day and closed her eyes. Whose world do I live in? Who interprets the meaning? 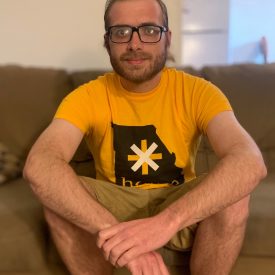 Jacob Griffin Hall was raised outside of Atlanta, Ga and currently lives in Columbia, Mo, where he is a PhD candidate and works as poetry editor for The Missouri Review. His poems have appeared or are forthcoming in New South, DIAGRAM, New Orleans Review, New Ohio Review Online, and other journals.