My wife’s uncle lived in a county known for exporting glass, colored sand, and lung disease. When I said the time had come to export her uncle Clarence to a place where professionals could tend him, Misty threw a bronze statue of a cat at me. I ducked, and it demolished our mantlepiece display: a village of ceramic, Victorian houses with quaint, frock-coated residents. I swept up the shrapnel while Misty drew up the grocery list. With my heel, I crushed the decimated roofs, the signposts, and the fragile walls into a drywall-fine dust. Villagers’ heads lolled in the dustpan, their pigeon-bead eyes frosted with crushed porcelain.

She hadn’t seen how brittle Clarence had become. When his memory and his smoking both got worse, she’d left his care to me—all his doctor’s appointments, every weekly grocery delivery. I saw everything instead. His eyes crusted with sand; the grey matter of his mind encased with plaque; his arteries spackled hard from decades of cholesterol and lard. His skin was glassy, quietly riven with veins blue as fracture lines.

A week later Misty and I descended on his house with a few brown-paper Kroger bags, brimming with groceries. His living room stank like a wharf: salt, sun-spoiled fish, kelp. Clarence was sifting cigarette ash, through his fingers, and into his fish tank. The ash dissolved. Misty shoved her bags into my arms. I nodded, stepped back toward Clarence’s recliner. There, his tabby cat, Murph, kept slapping his ass on the smart TV’s remote. The screen froze on a frame from a documentary about glassblowers in a commune of mystics. I’d watched it with Clarence weeks ago, maybe even months ago. I’d held his hand as the glassblowers puffed their cheeks at the aperture of the punty, the glass a molten bulb of candescence.

The captions were on. Murph ass-slapped the remote. The footage and the text scrolled: It is said that, with their final breaths, the holiest of them expel their souls into the glass. This, they say, accounts for the amber specks in the finished glass.

“For fuck’s sake, Dom,” Misty said. Her hands were manacled around Clarence’s wrists. He was shaking his ashtray. Misty bobbed her head to the kitchen. “Groceries. Counter. And then you can derp around with Murph.”

Murph followed me to the kitchen. I organized the groceries—a loaf of rye into the breadbox, butter and milk and cheese into the compartments in the fridge, packets of Quaker instant oats in a repurposed cookie jar, cans of Campbell’s Chunky Soup in the cupboard beside the microwave. In the sink were a week of dishes, freckled with fruit flies and whiskered with white filaments of mold. On the cat mat, Murph’s uneaten Friskies had congealed into a black puck.

Murph wriggled his ass, pumped his hips, and launched from the floor, to the counter, to the highest shelf in the cupboard. He rustled shoulder-deep into a five-pound bag of egg noodles and chowed down. The noodles snapped with the satisfying click of a wishbone. I tugged him out, and he writhed in my arms, rabbit-kicked the air like a malcontent infant. I could’ve done without him belching in my face, with his cardboard-and-grease cat breath.

Holding Murph, I straightened the rows of canned goods, pointlessly. Murph scratched his back on my chin and collarbone, like a cartoon bear against an old, tatter-barked birch. He purred.

“Let’s check what’s on,” I said. I peered through the doorway, back into the living room. Misty was grunting and tugging on Clarence’s elbow. He lurched, dragging them both to the aquarium. “The ash is good for their craws. The fish need it to swallow. To digest.”

“Shut it, Dom,” Misty said. “This doesn’t involve you.” She slapped at Clarence, who had some kind of wand in his hand.

“Goddamnit, Uncle Clary.” Misty had snatched the stick—the little net, I saw, for scooping out the fish when the tank needed a cleaning. It was a bit late for that. “Look! Just let me take care of it, okay? These two are dead and not even derp-butt Murph would eat them….”

With Murph slung over my shoulder, I slunk back into the kitchen. There was enough in the fridge to slop together a trio of cocktails—ice with a coating of grit that reminded me of atomic ash, a key lime La Croix, a half-pint of gin stored in the crisper drawer, and lime juice that passed the sniff test. I put the three drinks on an old dinner plate, its rim wreathed in blue ivy.

Misty was settling Clarence into his recliner. She rewound the documentary and pelted him with the remote. “Sit, dammit.”

The captions went on. The sect believes that pneuma—breath—is the source of all life. To blow glass, then, is to give life. So, glass the very substance of mortality. For this reason, the sect pays these artisans a courtesy they might afford only to the most devout amongst their numbers. Clarence dropped the remote.

Misty stooped, picked it up, and slotted it into Clarence’s hand. She licked her thumb, smudged the ash on his cheek. There was a spare Marlboro tucked behind his ear; this, she plucked free. The kiss she planted on his cheek was perfunctory, obligatory. But her fingers lingered in his thinning pate for a moment, combing and purling, considering.

She retreated to Murph and me, buried her nose in his orange pelt.

“No. Yes. Maybe. Oh, fuck you, Dom.” She exchanged Clarence’s cigarette for a gin and seltzer. “The other two,” she said, “had better be for me and Murph.”

The drink went quickly. She clapped her empty on the plate; Murph churled and his claws hooked through my shirt. She took the second in sips. “Don’t, Dom,” she said. “Don’t even start.”

The third gin also went, more slowly. She danced her fingers along Murph’s ribs and booped his nose. He jittered, crossed his luminous jade eyes, swatted at her fingers. For once he didn’t fart.

I set the plate beside the aquarium and took her hand. The surviving fish pecked at the flecks of soot in the water. A pair buoyed on the surface, their upturned bellies tarnished with mold. There were cigarette butts littered in the bottom of the tank. The glass reflected a shriveled merman version of Clarence—algae-bloom green, flesh scaled from nicotine and age. His head bobbed.

The documentary’s host blathered on, prim and British. The captions translated: According to the leader of the sect, one of the glassblowers died only a day before filming. It was said that he turned at once to dust. His ashes have been mixed into the glass.

“Hold onto the little ass-butt,” Misty said. “Just do that, will you.”

Murph bounced in my arms and headbutted my chin. I held him by the scruff.

She took a latex glove from her purse, tugged it on, gave it a snap at the wrist like a TV doctor. Clarence was humming and slouching in his chair. Misty nodded to Clarence’s ashtray. I held it out to her.

“Dom.” She took a packet from her purse. Powdered glass, flecked with orange—the pneuma of that glass-blowing sect. “Just let me take care of it, okay.”

In the documentary, a bulb pulled from a furnace’s glory hole ruptured with a sizzle, like summer rain on a sheet of tin.

With Murph still over my shoulder, I held the ashtray. Misty poured in the pouch of glass, swirled it with the ash from Clarence’s cigarettes. She dipped her fingers into the mix and sprinkled it through Clarence’s hair, along the arms of the easy chair. She flicked ash into the fish tank, along the carpet, on the TV.

She peeled off the glove and dropped it on Clarence’s crotch. “Come on, Ass-butt.” Her arm hooked through the straps on her purse. She eased open the door. “And hold tight to Murph.”

The door clicked behind us like a music box’s gears. “Don’t look yet,” Misty said. Murph belched and farted, a stink of sardines, stale noodles, and methane. He yowled and stuffed his face between the buttons of my shirt. When Misty tapped my shoulder, I cut a pivot on my heel. The plot’s grass was dead from the heat, a brown square roughly the dimensions of Clarence’s old ranch-style. In the center was a glass cube, no bigger than a shoebox, filled to its lid with candy-blue water. Inside it an old man slumped in his chair, grey flakes of artificial snow suspended around him. Bits of gold speckled and zipped through the water. Murph’s head juked, his eyes tracking each fleck. Already, algae bloomed green as tarnish in the water and drifted to the surface. 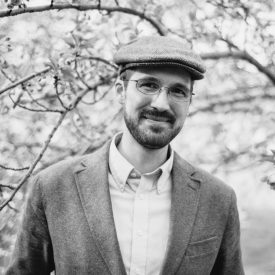 Patrick Thomas Henry is the fiction and poetry editor for Modern Language Studies. His work has appeared in publications including The Massachusetts Review, CHEAP POP, Longleaf Review, Clarion, and LandLocked, and he was selected for inclusion in Best Microfiction 2020. He’s a Teaching Assistant Professor and Coordinator of Creative Writing in the English Department at the University of North Dakota. Find him online at patrickthomashenry.com and on Twitter @Patrick_T_Henry.