Moving fluidly between Palestine and Chicago, How the Water Holds Me by Tariq Luthun asks us to stop and listen. With Palestine in the public eye so much these days and many ongoing atrocities coming to light, it’s an especially heart-rending collection to be reviewing. From the get-go, this title grabbed me. Where other collections’ titles offer clues or answers to the poems that lie within, the phrase How the Water Holds Me leaves me curious, hungry to understand what, and why, and how the water interacts in these pages. Being held by water holds the risk of drowning, yet water is precious and essential to life. And like water, other important aspects of life—family, community, religion—can be sources of healing and of harm. So, the tension in these poems emerges.

In “Portrait of My Father Drowning” the speaker realizes, “Earth, / itself…is just a body / of waters,” connecting Earth to the title’s hold on the speaker. Yet just as water has a shifting hold, so too is Earth’s: today’s political climate makes Earth a dangerous place for Black and Brown people. Over and over, violence seeps into these pages. The speaker’s trauma is evident in lines like, “…I saw/ a boy that could have become / me wash up on shore,” and, from the opening poem, “The Summer My Cousin Went Missing:” “How ever / will we live long enough to grieve?”

This question haunts the rest of the collection. In How the Water Holds Me, as often as not, it is the self or the community around the self that is the source of harm. In “I Chose Not To,” a poem after Lucille Clifton’s “won’t you celebrate with me,” the speaker identifies his body as “a body / that has only ever failed / to claim a life, including / its own.” Luthun’s poem explores a reversal of the celebration that Clifton invokes (everyday / something has tried to kill me / and has failed). Here, it is the speaker who is a danger to himself, who wonders “what my mother will think / if all I am to become is an empty / room, unworn shoes, poems / on a hard drive.” The speaker prays for “everything that has not tried to kill me,” as well as “everything that has tried and failed,” including himself in this prayer. Perhaps because he has never killed someone, or killed himself, perhaps because he still cares what his family might go through at his death, no matter their strained relationship, perhaps a sign of hopefulness or guilt, the speaker still identifies himself as someone who needs prayer, whatever prayer might mean him.

On the other side of that coin, in the poem “Seed,” the speaker confesses:

Always ready
to give,
the men in my family know
anger like an open palm.

The speaker involves himself in a lineage of violence, which is passed down from father to son; the father “went in” on the speaker for a “lack of / a job / a wife / a god.” Joined to this conversation about familial violence is the intertwined relationship between family and religion. It is not just the open palm that threatens danger; it is also verbal barrages of family and friends, the expectation to measure up. In “Finding Myself in the Direct Messages of Someone I Do Not Know is in Kuwait” the scenario unfolds further:

Each evening
erupts a fight between my family

and me, arguing about where my life is
headed, battling over the places my body

lands. I haven’t settled down
with a woman — I’m not sure

It’s clear that no one around the speaker has ever asked what the speaker wants for his life; they have only assumed he would follow their chosen path for his life. The speaker is “drenched in desire that isn’t / entirely [his],” wondering if he can safely get out on the other side of his family’s prescriptive ideas. This poem fleshes out the connective tissue between religious and familial expectations – the speaker is an adult, but is still weighed down by the pressures of parents who want to make decisions for him. Whenever he has tried or successfully broken free in the past, it has been at great personal cost. Allowing his father and mother to control his life comes with a different, but no less expensive price tag.

Here I want to interject for a moment: While I’m not Palestinian or Muslim, I come from a strict Evangelical and mixed-race family, and there are deep resonances for me in Luthun’s poems about family and religion. My own experiences run parallel to the speaker’s—overbearing religious ideology becomes twisted up in family expectations, leaving a person trapped between two flawed and difficult options. Luthun perfectly captures the tension between wanting a relationship with one’s family or wanting a religious connection while also questioning the costs of such a relationship. Families and religions have potential for good, but there is always a danger that the power balances can swing out of control, leaving children and followers somewhere closer to drowning than being held.

In “I Sing This Elegy for the Nameless,” the speaker reflects,

When I used to pray,
I saw myself a dove…
When I stopped calling out
to deities, some might have seen me
a crow…

Beyond the connotations of the white dove as purity and the black crow as impurity, it’s telling that the speaker saw himself as a dove, and was branded a crow by other people. For the speaker, leaving religion means losing some measure of autonomy and perceived ability for self-determination. Now that the speaker has left his former belief system, those who remain feel free to pass whatever judgements they choose. The “some,” though left unnamed, are heavily implied to be family members, as the speaker opens the poem waiting for “my old man [to wake] up / to call me on all the wrong I’ve done.”

Across the page from “I Sing This Elegy for the Nameless,” the poem “Portrait of My Father Drowning” continues “in the type of love he deserves,” rather than following the gruesome direction the title begins: this just is one example of Luthun’s excellent ability to enjamb poem titles and first lines to upturn readers’ expectations. The speaker transports us back to when his father taught him to swim. This sweet image comes to mind as the speaker, in the present, lifeguards at a different pool, witnessing other fathers teaching their sons to swim. “I lose / count of how many sons are held / by their fathers,” he muses, and it’s hard not to read a more ominous meaning into this image, with the media saturated with bereft parents and names and faces of Palestinian children.  The poem ends by referring to the swimming sons as islands with “fluttering limbs,” the image of flailing arms and legs returning to the drowning at the poem’s opening.

There are so many things at work in this poem: the first image of the father drowning, coming off the tail of the previous poem about family hurt and trauma, the next line, where the speaker turns swiftly to remembering his father as beloved and patient, a safety net in a swimming pool. And then there is the present-day speaker’s situation, the wistful tone taken in describing the fathers and sons together as the speaker recalls the past.

It feels right to close with the poem “We Already Know This,” which addresses the violence occurring in Palestine today and is full of astonishing kindness. “I haven’t forgotten that / everyone needs a place on this planet” the speaker says, after reminding readers of the ugly and recurring nature of genocide. Rather shaking his fist at the people ravaging Palestine, the speaker dreams about unlocked doors, or no doors or walls at all. He dreams of children held by their mothers, their fathers, by their homeland. He dreams of resilient people, their immeasurable losses, and still says, by way of the epigraph, “There is more to us than / what was taken from us.”

I could write about each poem in this collection more deeply than I’ve done here; I was captivated by the breadth and nuance every time I read another line. How the Water Holds Me wastes no space: each page offers some new kind of holding, some thread on which to pull. Luthun brings readers into the tension of longing to returning home and returning to find it flawed or broken. I return to these poems to interrogate, learn, and savor, drawn by Luthun’s deft ability to write about love and grief and violence and longing all at once, his power to turn a poem’s trajectory in the blink of a line, his honest, yet compassionate questioning. 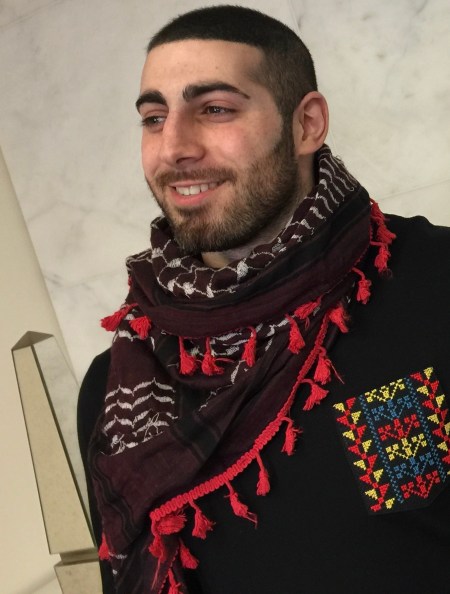 Tariq Luthun is a community organizer, data analyst, and Emmy Award-winning poet from Detroit, MI. He earned his MFA in Poetry from the Program for Writers at Warren Wilson College and currently serves as Editor of the Micro Department at The Offing. A Muslim and diasporic Palestinian, Luthun’s work has earned a number of recognitions, and has appeared in Vinyl Poetry, Lit Hub, Mizna, Winter Tangerine Review, and Button Poetry, among other credits. 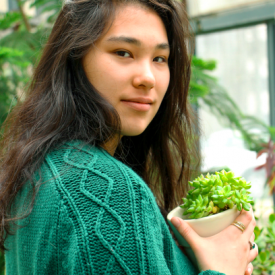 Genevieve Hartman is a Korean American poet based in upstate New York. She is the Director of Development & Publicity at BOA Editions, reads poetry for VIDA Review, and reviews for GASHER. Her writing has been published or is forthcoming in Stone Canoe, EcoTheo, Singapore Unbound, River Mouth Review, and others. Follow her on Instagram at @gena_hartman.