excerpted from In Paradise, Yellow Flowers

In my earliest memory, I’m seven, old according to most people. I was awake in the middle of the night with fire in my lungs. It was before the divorce, before all the moving—and I was having an asthma attack.

I reached for the inhaler on my nightstand. Air wheezed through my throat like the sharp wheeeee of a train’s constricted whistle. My lungs turned powerfully against me, and my efforts at deep breaths halted. I took puffs. Again. And again. The albuterol filled my mouth, chalky and stale. My ribcage burned, and I began to feel dizzy. Usually it worked quickly, but my chest got only tighter.

“Mommy!” I called into the dark room. And waited. My parents’ bedroom was just around the corner, but she didn’t come. “Dad!” I said this time, a little bolder. I grabbed my inhaler again. Finally, a blade of light cut across my bed.

“What’s going on?” came my father’s disgruntled voice. Through the dark, his thin body framed the doorway, and his long brown hair that was usually tied into a neat ponytail was loose and wild. He was rubbing his eyes.

When I didn’t answer, he asked more calmly, “What is it, baby?”

“Take your puffer.” He reached for where it was supposed to be on my nightstand, and I held it up in the dark.

“Take it again,” he said. I repeated the same actions as before: blow out, spray, inhale, hold. The fire burned and my lungs whistled. My father left and returned, holding my giant nebulizer, not with my mother as I had hoped.

He flicked the lights on, and bright white showered the room. “Let’s take your machine,” he said, calm but tired.

My nebulizer was a cream-colored box, the size of a toaster, and my father plunked it on the bed beside me and plugged it in.

“Sit up, all the way up. Straight.” He poured medicine from a vial into the small cup, prepared the face mask, and pushed it toward me. “Deep breaths.”

Nothing changed; my breathing was still shallow and painful. I began to panic.

I really tried not to.

“Alright, get up, get up,” he said. He snapped the machine off, yanked it up, and followed me to the kitchen, commanding, “Stop crying, stop crying,” to the heels of my feet.

Through our sliding glass door, I saw the dirt lot that was our back yard, and the mountain beyond. My father flicked the light switch, and the back yard was replaced with my murky reflection, my nose red and angry.

“Kristina, you have to stop crying,” he said, in a stern whisper. My sisters and brother were still asleep.

While I tried to get control of myself, fussing with the cords of the machine, my father opened the fridge. He filled two mason jars with milk, one for me and one for him.

“You can have this once your treatment is done,” he said, and this calmed me some. I put the now steaming nebulizer back in my mouth, and my father gazed at the reflection in the glass while the machine sputtered between us.

“What’s going on?” came my mother’s voice, cutting through our quiet. She emerged from the dark hallway, knotting the tie on her bathrobe.

“She can’t breathe,” my father muttered.

“No. I gave her a breathing treatment.”

“She doesn’t need milk, Mark, it will build up the mucus.”

“She hasn’t had any milk, Scarlett.”

“And the treatment? Did she finish it?” My mother reached for the machine’s cup that had begun to sputter and bubble. She gave it a sharp shake. “It looks like it’s gone. I can’t believe you gave her fucking milk.”

I reached toward the cup.

“No,” she said, pulling it away. “No milk.” She lifted it from the table. I watched the creamy liquid slosh around the rim.

Hunching over me, she pressed her ear against my chest. Her fluffy hair tickled the tip of my nose, and I half-giggle-coughed on the top of her head.

“Sh!” she said. She moved her ear, just like the doctor, from the top of my chest to the bottom and then around to my back.

“She’s still wheezing,” she said. My father was holding his empty mason jar frozen on a knee, gazing into the sliding glass door at the reflection of his wife and youngest daughter. He did not respond.

She spun to face him.

My father shrugged and stood. Then he paced back and forth from the kitchen table to the counter, and back to the table again, ignoring my mother’s repeating of his name. “Mark, Mark, Mark.”

“Mark, listen to her breathing.”

“I don’t know what to tell you, Scarlett.”

“Listen to it!” she screamed, and I wheezed.

“We have to take her to the hospital,” he said, finally.

At the hospital, I was admitted immediately, which resolved any suspicion even I had that this was all a farce. I spent two weeks there, receiving regular breathing treatments and was watched closely. My second-grade classmates sent a stack of get-well cards and I hung them around the room. What I remember though from that period filled with doctors, medications, television, and visits from my family is the distinct sensation that I wanted my mother.

When I reach back, I find myself sitting by the hospital windowsill, waiting. From this distance, I am sure she was there. Maybe she came after my father got off work, or when Siobhan and Jenny got home from school. Or perhaps after the family had eaten dinner. But my memory hits a wall. A fortress built from the longing that would come later.

This is what I remember: Curled against the twentieth-floor window, warmth on my skin, peering down at the tiny streets. I slide the tip of my finger across the glass, tracing the routes of the cars outside, trying to find my mother’s among them. But the world is huge, and she is too small. I skip my new Barbie across the windowsill, a blond with a pleated tennis skirt and blue high-heels that must have come from her—my mother was the only one who ever bought me Barbies—and together we wait. We wait for the mother that I want to come, the one I will spend my life waiting for. And my twenties running from. 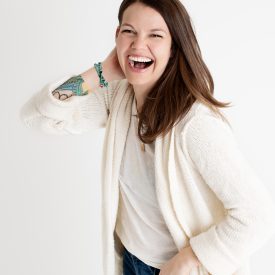 Kristina Tate is a writer based in Portland, Oregon. She has lived in Arizona, San Francisco, South Lake Tahoe, New York City, Australia and elsewhere. Her work has appeared in Narratively, Guernica, BOMB, and others. She is currently working on a memoir and a novel.