I loved you because you had my father’s name and shale-
blue eyes flecked with green: serpentine, dangerous things.

Early April, North Atlantic wind: half-thawed mud and ice.
For a diver, to come to the surface too fast is a dangerous thing.

The night I crossed the border, maybe it was forever. The guards
dumped my shoes in a heap on the ground. Boots are dangerous things.

We were 22 and sat in the backs of movie theaters, touched
thighs and arms, almost kissed. Don’t speak: too dangerous a thing.

My passport’s just expired, time-stained paper for a lukewarm fire.
Not all the flock arrives: migration’s an unkempt, dangerous thing.

We both have daughters now, but I rarely see mine. She lives south
a thousand miles. Abstract and distant, I’m not a dangerous thing.

These days, spring takes longer and longer to shuffle and shake upright.
To name something too soon is a doomed and dangerous thing.

I go by Oka now. On Granville Island, I married him, not you.
Dozens of Canadian strangers cheered. Still—an imperfect, dangerous thing. 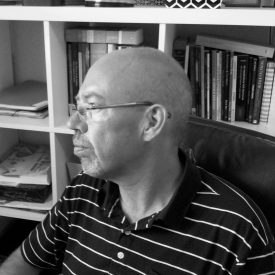 Steve Bellin-Oka is from Baltimore, Maryland and has lived in Mississippi, San Francisco, and Canada. His work has appeared or is forthcoming in Yalobusha Review, William and Mary Review, Mississippi Review, and Valparaiso Poetry Review, among other journals. He earned his MFA from the University of Virginia and his Ph.D. from the University of Southern Mississippi’s Center for Writers, where he was awarded the Joan Johnson Prize for Poetry. He is the recipient of grants and fellowships from the Vermont Studio Center and the Virginia Center for the Creative Arts. He currently lives in Portales, New Mexico and teaches at Eastern New Mexico University.