Watching the blast of the world’s first atomic bomb from a small hilltop in the New Mexico desert, J. Robert Oppenheimer exclaimed, “It worked!”

In subsequent years, he would amend and expand the thought. What he meant, he’d later say—what he was thinking behind that inarticulate exuberance—was a quote from the Bhagavad Gita, “Now I am become death, the destroyer of worlds.” He’d later say, “I suppose we all thought that, one way or another.”

Kenneth Bainbridge, another physicist present during that first test, may have been thinking this one way or another, but what he said to Oppenheimer was “we’re all sons of bitches now.”

Less than a month later, watching the bomb named Little Boy falling from the Enola Gay towards the city of Hiroshima, co-pilot Captain Robert Lewis said, “Look at that son of a bitch go!” What he wrote in the log he was keeping for the New York Times, however, was, “My God, what have we done?” At least one fellow crew member remembered him saying this aloud on the flight back to Tinian, so maybe he did try it out, having liked the sound of it on the page.

He repeated these words a lot over the years (the My God part, not the son-of-a-bitch), including on national television broadcast of This is Your Life honoring Hiroshima survivor Reverend Kiyoshi Tanimoto. Lewis was, reportedly, drunk during that performance—whether because of regrets about the bombing or because he’d just learned he would not be paid for his appearance, it is not clear. “My God” ended up on the cover of Time magazine, though the question thereto addressed was omitted. Given the later notoriety of the statement, we can’t blame his crewmate if he misremembered and interpolated something into the moment that wasn’t always there. The logbook has been sold at auction a number of times over the years and its accuracy cannot be verified, so there is no knowing how long it took for Lewis’s thoughts to turn theological.

I do not know what my grandfather said about the bomb in 1945, when he learned what it was he had been working on in a secret laboratory in the secret city of Oak Ridge, Tennessee. What he would say later echoed the thoughts of nearly everyone involved—it was an ugly but necessary thing that ended the war and saved the lives of both American and Japanese soldiers who would have been lost in an invasion. This line of reasoning has been proved increasingly specious over the years, but that matters little for those who need it.

My grandmother heard about the bomb two days before her wedding, and it got only a brief mention in her diary, towards the end of a long day’s bustle. “June + Mrs. Peterson came at 2 + took us to station where we met Max + Kelly + Fran’s train + took her to Fields for fitting, came home, opened wedding presents, heard that O.R Secret is out—all over papers and radio—making atomic bombs using them on Japs + then a rush for June Fran + me to bath + get dressed.” She says it just like that—one long breathless sentence. By O.R she means Oak Ridge, the town she had left just months before, and the true purpose of which she had just learned along with the rest of the world. But I suppose she was distracted.

I do not remember when I first learned of the bomb, or what I said then.

Because light travels faster than sound, the bursting of an atomic bomb is seen before it is heard; if you are sufficiently close to an atomic explosion, you will never hear it.

The bomb’s first word is a silence. 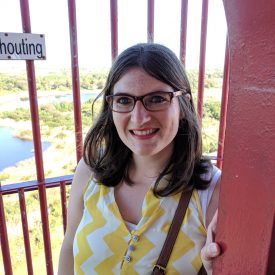 Emily Kiernan is the author of a novel, Great Divide (Unsolicited Press). Her work has appeared in American Short Fiction, Pank, The Collagist, Redivider, and other journals, and she has received support from The MacDowell Colony, The Ucross Foundation, The Sewanee Writers’ Conference, and other organizations. She is a prose editor at Noemi Press and a fiction editor at Rivet: The Journal of Writing that Risks. She lives in Pittsburgh with her man and her dog. More information can be found at emilykiernan.com.