and gredzens could angle into his ears

and mean, and his hands could

hammer, could carve, but could only write

(from Odessa to Riga to Ellis Island)

his signature. You could ask for haldzband

and count on its new weight resting

in the hollow of your neck, but you could

never slip him a note with samid scrawled

(pliers and sizers and hammers)

across its face and expect a bracelet. He never

could take those letters and make anything

but those letters etched in or formed of gold

or silver or copper. The loupe never told

(what a beard meant, to whom)

him anything but where to move and how

hard to press and when the piece was set,

was done. He spoke eleven

tongues, but the only alphabet he knew

(shine and skin, its reflection)

was chain and stone and filigree. A whispered

shirdis would yield a golden heart but no

is, no ss. I wonder when I hear this poem

in my head, I see its letters waver behind

my eyes, but he would have seen garnets

and sapphires maybe, or a bronze sizing

guard or a platinum clasp. What poem

would I write with those letters? What

(portrait on what wall?)

words? Was the sign above his shop, or the one

What would it mean to know someone

only by the sound of their name, but not its shape? 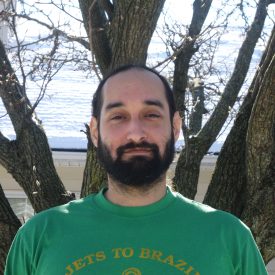 John A. Nieves has poems forthcoming or recently published in journals, such as North American Review, Crazyhorse, Southern Review, Colorado Review and Massachusetts Review. He won the Indiana Review Poetry Contest and his first book, Curio, won the Elixir Press Annual Poetry Award Judge’s Prize. He is associate professor of English at Salisbury University and an editor of The Shore Poetry. He received his M.A. from University of South Florida and his Ph.D. from the University of Missouri.